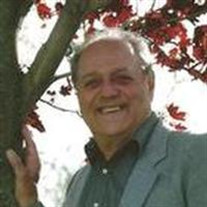 William “Bill” Titus, age 75, passed away at his home in Kalkaska on Thursday, February 28, 2013. He was born on New Year’s Day 1938 in Mackinaw City to the late John E. and Agnes M. (Frame) Titus.Bill married the former May L. Rohraff on December 3, 1955 in Garden City. They made their home in Kalkaska where they raised their 4 children. Bill grew up in the area and loved traveling, and camping and fishing with his grandchildren. He was a guitarist and enjoyed country music.Bill is survived by his devoted wife of 57 years, May; his loving children, Matthew (Connie) Titus of Gaylord, Cindy Beehler of Williamsburg, Sandy (Kip) Joslin of Kalkaska, and Shelly (Tom) Harrison of Texas; his 9 cherished grandchildren, Matt, Erica, Christopher, Jeffrey, Jennifer, Shannon, Stephanie, Michael, and Emma; his 5 precious great-grandchildren, Kijlee, Lilli, Christian, Madalyn, and Elia; and his dear brothers & sisters, Marian Rumbell, Cal Titus, Dorothy Minch, and Westland Titus.Bill was preceded in death by his parents; and his siblings, Leroy, Robert, Gloria, and Karen.A memorial service for Bill will be held on Sunday, March 3, 2013 at 12:00 p.m. at Wolfe-O’Neill Funeral Home with visitation being held one hour prior to the service.Condolences may be left online at www.wolfeoneill.com.Arrangements were made by Wolfe-O’Neill Funeral Home, our family serving yours.

The family of William "Bill" Titus created this Life Tributes page to make it easy to share your memories.

William “Bill” Titus, age 75, passed away at his home in Kalkaska...

Send flowers to the Titus family.