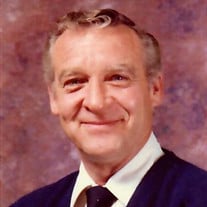 William “Bill” Harry Loose, 90, of Rapid City, went to his Heavenly Home on Saturday, March 23, 2019. Bill passed peacefully at home with his daughter Jamy by his side, whom has lived with and cared for him for the past seven years. Bill was born on October 23, 1928 in Anderson, Indiana to the late Bill and Marguerite Loose. After graduating from Anderson High School in 1946, Bill served in the US Army Corp of Engineers during World War II before he married the love of his life, Dawn Sheasley on January 22, 1949. They were happily married for sixty-two years before she preceded him in death Nov. 5, 2011. Bill graduated with a degree in education from Ball State University, and received his masters degree at Michigan State University. He began his teaching and coaching career in Hanover-Horton, before transferring to East Intermediate Junior High and also taught at Jackson High and Parkside High School in Jackson. He ended his career at Kalkaska High School as Asst. High School Principal. Bill loved hunting and fishing on Torch River for trout and had a very special place in his heart for baseball, basketball, and golf. Always an avid sports fan and athlete, Bill spent several years playing semi-pro baseball in Indiana for the Muncie Reds. His abilities crossed over to the basketball court as well, where he is often credited with the invention of the “jump-shot.” On the golf course, Bill excelled and went on to win seven first place trophies in the distinguished “BS Open.” He will always be remembered for his passion for sportsmanlike conduct on and off the field of play. Those close to Bill know him well for his ability to spin a tall tale, tell a joke or hook you in with a punch-line that you never saw coming. His zest for life and love of people made him easy to befriend. He currently holds the record for most whitefish caught on Torch Lake in a single winter. Bill is survived by his children, Jody Chambers of Elk Rapids, Rusty (Nan) Loose of Rapid City and Jamy K. Vandergriff, of Rapid City. Affectionately known as “Papa” to his grandchildren; Rebecca, Andria, Curtis, Lonny, Michelle, Jocelyn, Andrew and Sophia; and great-grandchildren, Aria, Lyra-Dawn, Ada, Janna, Scarlett, Luci and Millie. Bill is also survived by his beloved siblings, Robert (Linda) and Susan. Proceeding Bill in death was his wife, Dawn in November 2011; his grandson, Daniel Joel; and his brother, Edward (Judy). The celebration of his life will be at Kalkaska Church of Christ on Friday, April 5th at 1:00 pm. Memorials contributions can be made to the Dawn & William Loose Athletic Fund, Kalkaska High School, 109 N. Birch St., Kalkaska, MI 49646. Online condolences can be left at www.wolfeoneill.com Arrangements were made by Wolfe-O’Neill Funeral Home, our family serving yours. To send flowers or a memorial gift to the family of William Harry Loose please visit our Sympathy Store.

William &#8220;Bill&#8221; Harry Loose, 90, of Rapid City, went to his Heavenly Home on Saturday, March 23, 2019. Bill passed peacefully at home with his daughter Jamy by his side, whom has lived with and cared for him for the past seven years. Bill... View Obituary & Service Information

The family of William Harry Loose created this Life Tributes page to make it easy to share your memories.

Send flowers to the Loose family.