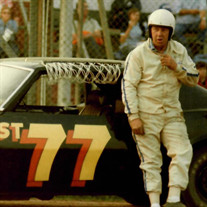 The checkered flag has waved for William Ernest “Wild Bill” Ellis, who crossed the Heavenly finish line 11-09-2018. He was born in Detroit, MI to William John Ellis and Inez May (Stocker) Ellis. Bill is survived by his wife of 52 years, Sue Ellis (Hanna), who now has access to the remote control, his sons Scott and Mike, grandchildren Will, Brie, Cole, Matthew, and Lindsay, brother Dave (Flo) Ellis, sister Toni (Jack) Jensen, and many nieces and nephews. He was preceded in death by his parents and brothers Gary John Ellis and Dan (Nancy) Ellis. He enlisted in the Army at 18 and spent time in Korea as a mechanic. Even then he was known to try to make vehicles go faster than they were supposed to which resulted in excessive tire wear on more than one Jeep. No Purple Hearts needed to be awarded. His favorite story to tell was from his military service; oh, wait, we can’t tell that one here. His second favorite story to tell was about the time that as a teenager he was driving golf balls off of his brother John’s forehead, never missing, until his mother saw what they were doing and screamed “STOP!!”. That time he did miss the ball, but he didn’t miss his brother’s head; no known permanent damage was recorded. His love of racing earned him the nickname “Wild” Bill and it was well deserved. In his younger days he was always racing something, whether legally racing stock cars at Tri-City and Berlin Speedways or not so legally drag racing on Gratiot Ave. He loved competition and speed, and was always doing his civic duty by donating portions of his paychecks to the local police departments. In the 1970’s and 80’s he raced at, and was track champion at both M-113 (Cherry) and Merritt Speedways; he was always competitive and always having fun. Later in life when people would recognize him and call him Wild Bill, he would correct them and say that now that he was older he was “Mild” Bill. Golf clubs, fishing poles, and the TV remote replaced the smell of exhaust fumes and burning rubber but his love of racing remained throughout his life. Everyone who remembers him is asked to celebrate Bill’s life in their own way; doing a nice, smoky burnout, sliding around a corner on a gravel road, or drowning a worm would probably be most appropriate (local laws, regulations, and licensing may apply). Instead of flowers Bill would hope that you would do an unexpected and unsolicited act of kindness for some poor unfortunate soul in his name. ☺ Therefore, if any man be in Christ, he is a new creature: old things are passed away; behold, all things are become new. II Corinthians 5:17

The checkered flag has waved for William Ernest &#8220;Wild Bill&#8221; Ellis, who crossed the Heavenly finish line 11-09-2018. He was born in Detroit, MI to William John Ellis and Inez May (Stocker) Ellis. Bill is survived by his wife of... View Obituary & Service Information

The family of William Ernest Ellis created this Life Tributes page to make it easy to share your memories.

Send flowers to the Ellis family.