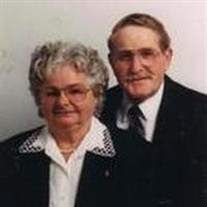 Wendell W. Vipond, 86, of Williamsburg, formerly of Kalkaska, passed away on Thursday, February 24, 2011 at Munson Medical Center in Traverse City. He was born on August 13, 1924 in Kalkaska to the late Walter and Bethel (Beaver) Vipond.Wendell married the former Ruth A. Moorman on December 13, 1947 in Kalkaska and moved to Williamsburg in 1968. Together they raised 3 wonderful sons. Wendell served his country proudly during WWII in the Pacific as a member of the United States Navy on the Aircraft Carrier USS Nassau. He retired in 1987 from Cone Drive Gear after 37 years of dedicated service. Wendell was a jack-of-all-trades and was the owner/operator of Vipond Builders. He built many homes and businesses in Kalkaska and the surrounding areas. Wendell was a member of the East Bay Calvary Church. He enjoyed hunting and fishing but most of all he loved spending time with his family and friends. Wendell was always available to help anyone in need. He will be deeply missed by all those that knew and loved him.Wendell is survived by his devoted wife of 63 years, Ruth; his 3 loving sons, Dan (Sandy) Vipond of Williamsburg, Jerry (Barbara) Vipond of Grawn, and Perry (Stella) Vipond of Suttons Bay; his 7 cherished grandchildren, Joshua (Janice), Jacob (Penny), Jennie (Peter Fay), Jeremiah, Jordan, Matthew, and David; and his 8 precious great-grandchildren, Danielle, Brittany, Payton, Mallory, Caity, Elizabeth, Wyatt, and Bridger.Wendell was preceded in death by his brothers, Rupert Vipond and Clinton Vipond.Public visitation will be held on Monday, February 28th from 4-8 p.m. at Wolfe-O'Neill Funeral Home of Kalkaska. Burial will be take place at a later date at Evergreen Cemetery with Pastor Kendale Dennis of the East Bay Calvary Church officiating.Condolences may be left on-line at www.wolfeoneill.com.Arrangements were made by Wolfe-O'Neill Funeral Home, our family serving yours.

Wendell W. Vipond, 86, of Williamsburg, formerly of Kalkaska, passed away on Thursday, February 24, 2011 at Munson Medical Center in Traverse City. He was born on August 13, 1924 in Kalkaska to the late Walter and Bethel (Beaver) Vipond.Wendell... View Obituary & Service Information

The family of Wendell W. Vipond created this Life Tributes page to make it easy to share your memories.

Send flowers to the Vipond family.