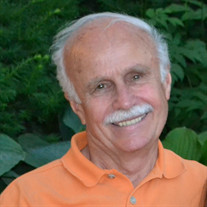 Walter Louis Walker was born August 19, 1932 in Alpena, Michigan to James and Dora (Thorne) Walker. He was raised in Detroit along with his two brothers, Jim, Tom and a sister Rosemary, he remained close to his family throughout his life. Walt made many lifelong friendships during his school years in Detroit. He attended Guardian Angels Elementary School, and De La Salle and Denby High Schools. He graduated from Wayne State University with a bachelor’s degree in business and was a member of the TARA Fraternity. He had many jobs to support the cost of his college studies, including delivering newspapers and telephone books, and distributing beverages for Vernors in Detroit. After graduating from Wayne State, he served two years in the United States Air Force in Texas as a navigator, then four years as a captain in the Michigan Air National Guard flying in B-25 Bombers and F-89 Scorpion Fighters. Walt worked for General Motors at the Technical Center in Warren, MI for 38 years and became Director of the Color Studio overseeing the design of interior fabrics and exterior paints for all GM vehicles. He married Nancy Margaret Harrington in Charlotte, MI on December 28th, 1957. They raised four children in Royal Oak, were loving devoted parents, and welcomed with refreshments and kindness all friends that entered the home. They were avid sports fans when it came to their kids and were always cheering on the sidelines for the many baseball, football, basketball, track and cross-country events. Walt also coached the boys’ Madison Heights Mustangs, and Royal Oak Michigan Life baseball teams for many years. He enjoyed taking his family on vacations with everyone piled into the family station wagon. In the summer, they traveled to the family cottage on Hubbard Lake, MI, and extended cross-country adventures with camping gear in tow using AAA Trip Tik maps. Winter skiing trips in northern Michigan were family favorites. Walt and Nancy were parishioners at Shrine of the Little Flower Basilica for many years and Walt was a long-standing member of the Shrine Dads Club. He also worked with young adults as a volunteer for Junior Achievement. Walt and Nancy spent many fun evenings out playing in bridge clubs and dining with neighborhood supper clubs. Walt and Nancy’s marriage lasted 29 years until Nancy fell ill and suddenly passed away from cancer in 1986. Several years later, a reunion of an old Royal Oak neighborhood bridge club reconnected Walt with Charlette Carlson, also recently widowed. They dated, fell in love, and were married on December 29th, 1993 in Farmington MI. Walt and Charlette enjoyed extensive travel together including the United Kingdom, China and European destinations. They enjoyed ski trips out west and up north. They lived in Clarkston MI for many years before relocating to Traverse City MI in 2003, and then spent the past four year in Elk Rapids MI. Becoming “up north residents’ Walt and Charlette enjoyed all the area had to offer in the company of dear old friends and met new ones through the Newcomers, including a Jazz Appreciation group they became part of. They were volunteers with the Father Fred Foundation and enjoyed visiting with their combined six children, twelve grandchildren, and extended family. Walt succumbed to cancer in his Elk Rapids home surrounded with loving family at the age of 87 on Tuesday, December 31, 2019. Much grace was brought his life with the compassionate assistance of Hospice of Michigan and Comfort Keepers. Walt is survived by his beloved wife Charlette Carlson Walker, children Tom (Mary Beth) Walker of Marriottsville MD, Matt (Clare) Walker of Livermore CA, Julie (Chris) Cameron of Royal Oak MI, Anne (Karl) Pfendt of Redwood City CA, Carey Carlson (Bernard) Clauss of Elk Rapids MI, Claudia Carlson (Jim) Keglovitz of Clarkson MI, and grandchildren Sarah Walker, Kirsten Walker, Justin Walker, Jack Walker, Andrew Walker, James Cameron, Clare Cameron, Libby Pfendt, Nancy Walker, Katherine Walker, Michael Walker, and Clay Keglovitz; many nieces and nephews; in-laws, Linda Walker, Dennis Hawhee, and Bonnie Chapman. Walt was preceded in death by his parents, his siblings, Jim Walker, Tom Walker, Rosemary Hawhee and his first wife. He was a loyal, loving, kind and gentle man, and will be greatly missed. In keeping with Walt’s wishes cremation services have been entrusted to Wolfe-O’Neill Funeral Home in Kalkaska, MI. His family is planning a memorial celebration in Royal Oak, MI to be held in August 2020. Interment will follow at Roseland Park Cemetery, Royal Oak, MI. Memorial contributions may be made to the charity of your choice.

Walter Louis Walker was born August 19, 1932 in Alpena, Michigan to James and Dora (Thorne) Walker. He was raised in Detroit along with his two brothers, Jim, Tom and a sister Rosemary, he remained close to his family throughout his life.... View Obituary & Service Information

The family of Mr. Walter Louis Walker created this Life Tributes page to make it easy to share your memories.

Send flowers to the Walker family.