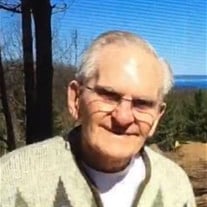 Wallace Ray "Walt" Heller, 94, of Kalkaska, went peacefully to be with the Lord on March 29, 2018. He was born on August 13, 1923 in Lansing, Michigan to Ralph and Katherine (Kuster) Heller. Walt was a World War II veteran, he joined the Marines upon graduating from high school in 1942. After bootcamp he became a member of the Edsons’s Raiders and served in active duty on Guam, Okinawa, Guadalcanal (and other Solomon Islands) and the mainland of Japan. After the war he met the love of his life, Helen Mae Shaffer. They were married for 69 years . Helen preceded him in death in 2015. Walt worked for 7up Bottling Company for 34 years while living in the Detroit area and raising 4 children. In 1986 Walt retired from 7up, moved to the Kalkaska area and worked part time at McLeans Hardware for the next 26 years. Walt loved doing anything with family including camping, fishing, hunting, coaching little league and playing pinochole into the wee hours of the night. Deer camp with his sons, grandsons, and nephews was a yearly high point, and he did so until the young age of 92. Walt loved people, was a master story teller and the consummate entertainer at gatherings. His big and unique personality made him unforgettable and loved by many in the community. Walt was a member of the Kalkaska United Methodist Church and continued to be served by the Women of Worship until his death. Kalkaska Assisted Living has been home to Walt for the past 6 years and the family is thankful beyond measure for the love and care they have provided. Walt was truly one of the great men of the “Greatest Generation that ever lived” He is survived by his children Nancy (Geoff) Carter of Alpena, Tom (Melissa) Heller of Lake Leelanau, Dan (Judy) Heller of South Boardman; 9 grandchildren, 14 great grandchildren and one great great grandchild and many nieces and nephews. He was preceded in death by his beloved wife Helen, daughter Kathy Hanson, and sisters Ruth Grace and Mildred Miller. A memorial celebration of life will take place at a later date. Donations in memory of Walt may be made to Heartland Hospice, 4020 Copperview Dr. Suite 113, Traverse City, MI 49684. Arrangements were made by Wolfe-O’Neill Funeral Home, our family serving yours.

Wallace Ray "Walt" Heller, 94, of Kalkaska, went peacefully to be with the Lord on March 29, 2018. He was born on August 13, 1923 in Lansing, Michigan to Ralph and Katherine (Kuster) Heller. Walt was a World War II veteran, he joined the Marines... View Obituary & Service Information

The family of Wallace Ray Heller created this Life Tributes page to make it easy to share your memories.

Send flowers to the Heller family.