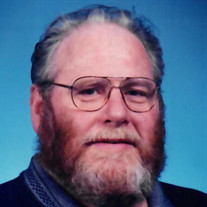 On Monday, April 15, 2019, Thomas E. Bauer entered peacefully into the arms of his Savior after a lengthy illness. Tom was born July 4, 1941 in Saginaw, Michigan the second son of Joseph and Maxine (LaLonde) Bauer. He attended St. Peter and Paul grade school and high school in Saginaw, and continued his education at Ferris State University graduating with a degree in Commerce. After graduation from Ferris, Tom taught school for three years. He then entered the business world hiring with Amerisure Insurance (then called Michigan Mutual) as a commercial underwriter. In 1984, Tom was transferred from the Saginaw office to the Grand Rapids office as district underwriting manager. In November 1968, Tom married the love of his life and forever partner, Ardis Fischer. One of Tom’s personal wishes was to make it to 50 years of marriage which he did this last year. Upon retirement in 1999, Tom and Ardis moved to the great up north on 160 acres of wooded land full of animals including bears, which he was able to enjoy for 19 years. Tom is survived by his wife, Ardis, daughter and son-in-law Alan and Nina Schwab of Gurnee, Illinois, three grandchildren, Alayna of Columbus, Ohio, Caleb, and Maki. Tom was predeceased by his parents and an older brother, Roger Bauer. Also surviving are two sisters, Mary (Richard) Achtabowski of Saginaw and Barbara (Richard) Burns of Rockford, Michigan. He is also survived by his home helper, Robin Nyson, Kalkaska, whom he really cared for and appreciated. Tom was known for his easy going personality and his ability to make anyone laugh. He had a beautiful voice and was a choir member for many years in Grand Rapids. He also loved to sing at home. His favorite song was “Strangers in the Night”, the song he first danced with his wife on the night they met. Thanks to Pastor Eric Black for his many home visits. Thanks also to his doctor, Todd Kreykas, who also made home visits. This family also appreciated the many times the Boardman Township first responders were called to the home. Funeral services will be Monday, April 22, 2019, at 11:00 am. at St. Paul’s Lutheran Church, 2470 Beebe Road, Kalkaska, Michigan. Visitation will be at 10:00 a.m. prior to the funeral service. Memorials may be directed to St. Paul’s Lutheran Church Preschool or the Kalkaska Animal Shelter. Arrangements were made by Wolfe-O’Neill Funeral Home, our family serving yours. www.wolfeoneill.com.

On Monday, April 15, 2019, Thomas E. Bauer entered peacefully into the arms of his Savior after a lengthy illness. Tom was born July 4, 1941 in Saginaw, Michigan the second son of Joseph and Maxine (LaLonde) Bauer. He attended St. Peter and... View Obituary & Service Information

The family of Thomas E. Bauer created this Life Tributes page to make it easy to share your memories.

Send flowers to the Bauer family.