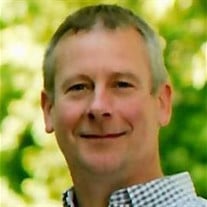 Stephan “Steve” Leslie Boucher, 51, of Louisville, KY, and formerly of Kalkaska, passed away from his earthly home to his eternal home on January 31, 2019 with his loving family by his side. Steve was born on August 1, 1967 in Kansas City, Missouri, to Dr. Alan and June (Dorfman) Boucher. He was the youngest of four children. Steve graduated from Kalkaska High School and went on to make a career as a master electrician. He owned his own electrical businesses and a security alarm system business for homes, offices and businesses. A highly respected businessman by everyone he worked with, Steve was admirable, considerate, honorable, and always went the extra mile for his clients. In doing so, he made many long and lasting friendships. Steve was a draftsman, carpenter and did good finish work. He was true to a work ethic to always do the right thing. He was forever willing and first to help others. Steve met the love of his life, Janna Kay Rodgers, at a high school football game. On June 27, 1992, Steve and Janna Kay were united in marriage in Kalkaska. They had a cherished, deep abiding love and were totally inseparable until Steve’s passing. Over their married life together they had made their home in Kalkaska, California, Royal Oak and for the past fifteen years they have resided in Louisville, KY. Steve was all about family, it was his greatest joy. He was a caring, devoted and loving husband and father, he truly cherished the family life. He was proud of his children and always had a smile on his face when he talked about their accomplishments. Steve was the rock of his family, always providing love, security and support to each of them. He maintained one step ahead of them as their leader and protector. Steve had a heart of gold, and he focused his energy on taking care of the needs of his loved ones before his own. Steve and Janna’s family have always been very close and tight knit, enjoying each other’s company and travels together. You could find Steve playing drums, while his son, Zach played the guitar, again they were making memories together. A few short years ago Steve and Janna packed up their family, camper and took an extended trip through the Midwest and western states clear to the Pacific shore and all parts in between. They visited as many national and state parks as time would allow. This was the high light of all their various vacations, a trip they will forever remember. Steve enjoyed cooking with the family and was great at grilling. Many enjoyable times were spent cooking out. Steve enjoyed fishing and hunting with Zach. He looked forward to the annual fishing trip to Canada with his close and dear childhood friend Kirk Beaver, and dear friends Richard Beaver and Gene McLean. Steve included Zach on the last trip they made to Canada. It was a fun and relaxing time together. Steve was a great morel mushroom hunter. He enjoyed spending hours in the woods searching, taking his bounty home and preserving them. Steve is survived and deeply missed by his devoted and loving wife, Janna Kay; his children, Madison, Zachary and Lily; his mother, June Boucher of Ohio; siblings, Sharon Urbin of Florida, Jeffrey of Chicago and Tom (Susan) of Louisville; his father and mother-in-law, Will and Patty Rodgers, of Kalkaska; brother and sisters-in-law, Bill and Donna (Rodgers) LaGrandeur, Robert and Vicki (Rodgers) Scott all of Kalkaska, Walter and Jonie (Rodgers) Ernest of Texas; and many nieces and nephews who dearly loved their Uncle Steve. Steve was preceded in death by his father, Alan; and his maternal and paternal grandparents. Steve was a friend to all and made friends easily. He was a very gracious and generous man and will be greatly missed by all who knew and loved him. There are numerous people who will feel the void. A memorial service, honoring Steve, was held at the Middletown Christian Church in Louisville, KY. Memorial contributions can be made to The Boucher Children’s Fund, c/o L & N Federal Credit Unio , 12629 Taylorsville Rd., Louisville, KY 40299.

Stephan &#8220;Steve&#8221; Leslie Boucher, 51, of Louisville, KY, and formerly of Kalkaska, passed away from his earthly home to his eternal home on January 31, 2019 with his loving family by his side. Steve was born on August 1, 1967 in Kansas... View Obituary & Service Information

The family of Stephan "Steve" Leslie Boucher created this Life Tributes page to make it easy to share your memories.

Send flowers to the Boucher family.