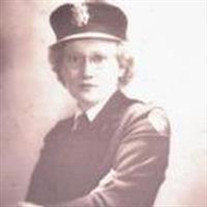 Shirley Louise White, age 96, passed away on Wednesday, August 28, 2013 of natural causes at Tendercare Birchwood Nursing Home in Traverse City. She was born on March 21, 1917 to Chester Elijah and Roseanna Charlotte (Ross) White. Shirley grew up on the family farm in Canajoharie, Montgomery County, New York with her 3 siblings, Ruth Elinor, and Gordon. Being raised on a farm she learned that hard work, dedication, perseverance and service are necessary for life.Shirley was a veteran of World War II where she earned the rank of Second Lieutenant in the Army Air Corp. While serving as a nurse in the Corp, she received the American Theater of Operations Campaign Ribbon. During her time in the military, Shirley developed a love of helping people in need. After retiring from the Army Air Corp, she worked as a nurse in what is now known as the Bay Pines VA Healthcare System in Pinellas County, Florida. While in this transition, Shirley was able to save enough money to purchase and renovate three homes in St. Petersburg, Florida. She took pride in the outward appearance of her homes and did most of the landscaping and upkeep. The income generated from two of these homes allowed her to travel to Bali, New Zeeland, Sidney, Australia, Bangkok, Singapore, Hawaii, Hong Kong, Tokyo, and Japan.Shirley spent many years caring for infants doing daycare and opened her home selflessly to those that were in need. Because Shirley had a big heart, she invited her sister and her son to live with her. This was a mutual benefit – companionship and a financial plus.Because of her love for serving others, Shirley played an active role in her church when there was a need. Six years ago Shirley moved to Traverse City, Michigan to live with her nephew and his family.Ms. White is survived by her nephew, Thom L. Hooper, his wife, Dana L. Hooper and great nephews, Mark, Greggory, and Timothy Hooper.She was preceded in death by her parents and her 3 siblings. Graveside services will be held at the Memorial Park Cemetery in St. Petersburg, Florida on Friday, September 13, 2013 at 10:30 a.m. with Military Honors.Condolences may be left online at www.wolfeoneill.com.Arrangements were made by Wolfe-O’Neill Funeral Home, our family serving yours.

The family of Shirley White created this Life Tributes page to make it easy to share your memories.

Send flowers to the White family.