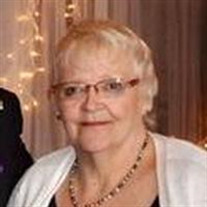 Sharon L. (Arp) Richards of Traverse City, entered into heaven on Friday, July 22, 2016, at the age of 65 after two battles with lung cancer. She was born on September 25th, 1950, in Traverse City to Walter C. and Lucille N. (Kilmury) Arp. Sharon enjoyed gardening, camping, fishing, having BBQ’s, playing cards, and spending time with her family. Her lifelong dream of going on a sleigh ride came true in February, when she went with her family. She had many sayings that she was known for like “Now I lay me down and bleed awhile, I will rise and fight again”, “Your general is behind you”, “They can’t get you for what you’re thinking”, and if she was really mad, she would call someone “pond scum” or “jerk face”. She grew up on Old Mission Peninsula and spent a lot of time on family farms, picking cherries, swimming and fishing in the Grand Traverse Bay. She was extremely proud of being Irish. She worked as a chef for many years at Bower’s Harbor Inn, Downtown Charlie’s and her favorite position was at Williamsburg Recovery Center. She loved helping people and was a great listener. Sharon was a member of Trinity Lutheran Church in Traverse City and has a deep love of the Lord. She also enjoyed listening to the preacher on TV each morning and studying her Bible. Sharon was preceded in death by her father (Walter C. Arp), her mother (Lucille N. Arp) and her beloved dogs Daisy, Bruno, and Rufus.She leaves behind cherished memories with family that loves her so very much. Her daughters: Lynda(Bill) Freet, Lisa (Billy) Sutton, and Larissa (Mike) Ellis, Lindsey (Alex) Mikula, her brothers: Kimberly (Jocelia) Arp, Terry (Sherry) Arp, her grandchildren: Jonathan Boyko, Kaitlyn Boyko, Clay Sutton, Saxton Freet, Kyle Sutton, DJ Freet, Emily Mikula, Jacob Sutton, Andrew Mikula, and Allyson Sutton, and her niece Tiffany(Adam) Giacobazzi and nephew Chad Arp. She also leaves many lasting memories with extended family and friends.Sharon will be placed at Memorial Gardens in Traverse City with her mother and father. Sharon chose to have a BBQ before her passing instead of a memorial. Donations to help with her final expenses can be sent to her daughters.Arrangements by Wolfe-O'Neill Funeral Home, our family serving yours.

Sharon L. (Arp) Richards of Traverse City, entered into heaven on Friday, July 22, 2016, at the age of 65 after two battles with lung cancer. She was born on September 25th, 1950, in Traverse City to Walter C. and Lucille N. (Kilmury) Arp. Sharon... View Obituary & Service Information

The family of Sharon Lee Richards created this Life Tributes page to make it easy to share your memories.

Send flowers to the Richards family.