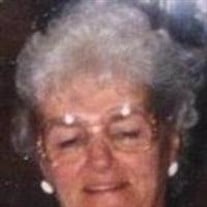 Selina “Sally” Louise Woodward, our Tata, 81, passed away peacefully on the 7th of February 2013 in Traverse City. Our beloved mother, grandmother and great-grandmother was born on the 10th of August 1931 in Detroit to Joseph Vincent and Genevieve Catherine (Monahan) Miller.Tata was the second eldest of 5 children and she graduated from St. Theresa High School in 1949. She was married in 1951 to Howard Kenneth Hodgins and became mother to 6 children. After being widowed, she remarried, had 2 additional children and became a stepmother to 4 children. In 1977, Tata and her husband, Jack, relocated to their property in Leelanau County to continue raising their family. A homemaker first and foremost, she was caregiver to her own grandchildren, for other children outside of the family, as well as elderly family members. Tata also worked at Perrins Landing, Munson Medical Center, and Meijer.When she was growing up, Tata and her siblings created their own language of sorts, and as she became a mother, she coined many phrases that she shared with her own children and grandchildren. These phrases have become part of the family language of love. Ask any of us, especially the “grals”, about how to get “maimed” or how to make a “dee-vine” meal. Tata always had a full house, both her own family and others that she cared for over the years and her house was always spotless. All of the family members could tell a story about finger vacuuming, as it was practically a sport at her house. Tata most enjoyed family gatherings at home, at the beach, or sitting around a bonfire sharing good stories and homemade family food specialties she taught to her girls.In addition to her parents, she was preceded in death by her husbands, Howard Kenneth Hodgins and Jack Dale Woodward; her son, Christopher Daniel Hodgins; her daughter, Denise Ellen (Sinacola) Jackson; her siblings, William (Dawn) Miller, Helen (Woodruff) Crouse, Catherine (John) Grech; and daughter-in-law, Gloria Hodgins.She is survived by her loving children, Ronald Hodgins of Traverse City, Debra (Gary) Rushton of Traverse City, Diane Guth of Manteca, CA, Darlene (Owen) Brown of Westland, Kelly (John) Galnares of Traverse City, Jennifer (Satbir) Singh of Chesterfield; her step-children, Pamela Woodward, Brent Woodward, Beverly Frederick, and Lester Woodward; her devoted grandchildren, Leah (Jon) Karibian, Kristin Hodgins, Martina Thomas, Theresa (Audie) Rushton-Herrera, Diane (Zachary) Taylor, Gina Sinacola, Julie Sinacola, Jason (Jennifer) Sinacola, Janay Sinacola, Justin Sinacola, Jennette (Alejandro) Alvarado, Jeriann (Oaken) Ewens, Benjamin (Monica) Brown, Sarah Brown, Brandon Brown, Daniel Brown, Renzo Galnares, Lily Galnares, Kaitlin Singh, Christopher Singh, and Cameron Singh; her sister, Rita Rose Douglas of Centerline; and her 17 great-grandchildren.A family memorial service will be held this summer.“What we have once enjoyed we can never lose. All that we love deeply becomes a part of us.” – Helen KellerCondolences may be left online for the family at www.wolfeoneill.com.Arrangements were made by Wolfe-O’Neill Funeral Home, our family serving yours.

Selina &#8220;Sally&#8221; Louise Woodward, our Tata, 81, passed away peacefully on the 7th of February 2013 in Traverse City. Our beloved mother, grandmother and great-grandmother was born on the 10th of August 1931 in Detroit to Joseph Vincent... View Obituary & Service Information

The family of Selina "Sally" Woodward created this Life Tributes page to make it easy to share your memories.

Send flowers to the Woodward family.