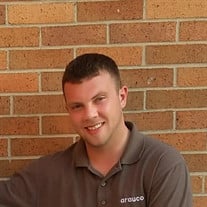 Ryan Robert Ramsey, 28, of Kalkaska, passed away unexpectedly on June 19, 2018. He was born on November 16, 1989 in Traverse City to Jack and Debra (Ingersoll) Ramsey. Ryan loved his work and had a successful career as an automation specialist /engineer which he did for seven years. He also started his own business, called R6 automation, which was named from the three “R’s” in his name and the three “R’s” in his son’s name. He was an amazing provider and touched everyone’s lives he met. He was an alcoholic in recovery for three and a half years and was very proud of that. He helped anyone in recovery, including his father Jack and his brother Jack Jr. He took great pride in his family and was the definition of a family man. He spent almost all his free time with his wife Faith and his son Ryan. He was known for his quick wit and always had a clever response. Ryan, Faith, and little Ryan would go to the U.P. every year for Faith’s birthday and, would watch the fireworks in St. Ignace. Ryan became an avid hunter in his late teens. Ryan had a way of telling stories that was so engaging. He was able to be interesting and honest while completely charming. His humor and animation kept you entertained from start to finish. Ryan will be greatly missed by all those who had the pleasure of knowing him. Our Sunshine Boy. Ryan is survived within his loving wife, Faith Ramsey; his son, Ryan Robert Ramsey II; his parents, Jack (Debra) Ramsey; brother, Jack Ramsey; and many close friends and family. A funeral service will be held Friday, June 22, 2018 at 1:00 PM at Wolfe-O’Neill Funeral Home in Kalkaska, MI. In Lieu of flowers, please make a memorial contribution in Ryan’s behalf to his family, C/O Faith Ramsey, 106 S. Cherry St. Kalkaska, MI 49646. The family is being served by Wolfe-O’Neill Funeral Home, our family, serving yours.

Ryan Robert Ramsey, 28, of Kalkaska, passed away unexpectedly on June 19, 2018. He was born on November 16, 1989 in Traverse City to Jack and Debra (Ingersoll) Ramsey. Ryan loved his work and had a successful career as an automation specialist... View Obituary & Service Information

The family of Ryan Robert Ramsey created this Life Tributes page to make it easy to share your memories.

Send flowers to the Ramsey family.