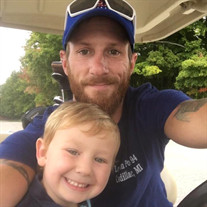 Ryan James Kleeman, 35, of Cadillac passed away suddenly Sunday, September 29th, 2019. Ryan was born July 14th, 1984 at Cadillac Mercy Hospital. Ryan lived with his mother Sharon "Michelle" (Wood) Kleeman and father Reginald "Reggie" Kleeman, brother Billy and sister Audrey. He later in life was united and formed a relationship with his biological father Mark Thwaites. Ryan graduated from Cadillac High School class of 2002 with lifelong best friend Ramsey Austin. He also worked his first job at Ponderosa and took away many fond memories from his time there. Ryan then moved to Newberry with his parents. From there Ryan moved to Florida living with Ramsey and Larry Austin to work construction. This is where his love for the trade of building, creating and remodeling was developed. He then took a job with Premier Workforce traveling all around the United States for many years. In April of 2014, Ryan moved back to Cadillac and settled down with current fiancé Tina Marie Richardson and her son Izaiah Wood. On April 16th, 2015 their son Jayce Victor James Kleeman was born. Ryan continued to work in the building trades and cultivated many more lasting friendships. Earlier this year he started a new chapter in masonry at Positive Chimney & Fire Place where he was employed at the time of passing. Ryan loved mud bogging, tubing down the Manistee River, golfing, fishing, hunting, camping, cookouts and watching football but his greatest love of all was his family, friends and son. He was fortunate to have experienced many great things in his short life while traveling such as sky diving, hiking Mount St. Helens, MMA fighting and most recently a lifelong dream of racing in a demolition derby. Ryan easily made friends anywhere he went due to his vibrant, witty, kindhearted, goofy personality which gained him a few well-known nicknames such as "Ryno" and "Kleemo". He was a hardworking, skilled tradesman and genuine, loyal friend who loved to be the life of the party and lit up every room he walked into, for which he will be immensely missed and remembered for. Ryan is survived by his son: Jayce Kleeman; fiancé Tina Richardson (Izaiah Wood); biological father: Mark Thwaites; siblings: Billy Wood, Audrey (Brad) Woods, Johnny Thwaites, Virginia Jones, Josh Thwaites, Jesse Thwaites, Gloria (Steve) Thwaites-Sisson, Gavin Thwaites and Liberty Thwaites; aunts and uncles: Mike (Michele) Wood, Nancy (Rex) Nixon and Myrna Wood; grandmother: Joyce Wood; several cousins and several nieces and nephews. Ryan is preceded in death by his mother: Sharon Michelle Kleeman; father: Reginald Kleeman; uncle Bryan Wood; cousin: Angela "Angie" (Wood) Weston; and grandfather Victor J. Wood. A memorial service followed by a celebration of life will be held at 5:30pm Thursday, October 10th at The American Legion Post 94 in Cadillac. An Education Fund has been set up for Ryan’s son Jayce and donations can be mailed to Tina Richardson, c/o Wolfe-O’Neill Funeral Home, 106 S. Cherry St., Kalkaska, MI 49646. Arrangements were made by Wolfe-O’Neill Funeral Home, our family serving yours.

The family of Ryan J. Kleeman created this Life Tributes page to make it easy to share your memories.

Send flowers to the Kleeman family.