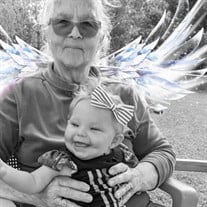 Ruth Marie (Blank) Coan, 76 of Kalkaska, MI passed away on August 21, 2020 surrounded by her children and grandchildren due to injuries sustained in a house fire the morning of August 19, 2020. She was born to the late Theodore and Irene (Wanger) Blank on December 10, 1943 in Olney, IL. Ruth was one of eight children. Ruth and her late husband Phillip enjoyed hosting the National Trout Festival children’s trout pond at their home the last weekend in April. This year would have been the 14th year they would have hosted. Yellow roses were her favorite flower and she enjoyed canning with her daughters or playing Shanghai with the family. Ruth was a devoted wife, mother and grandmother. Ruth is survived by her son, Vern (Lori) Coan, of Kalkaska; daughters, Robin (George) Gipson, of Merrillville, Indiana, and Lois (Jim) Nation, of Kalkaska; grandchildren, Chadwick Duran, Alicia Thayer, of Fife Lake; Gavin Coan, Levi Nation, Garrett Coan, Katherine Nation and Nicholas Coan, all of Kalkaska; great grandchildren, Eli Thayer, Lucas Thayer, Margaret Thayer-Duran of Fife Lake; siblings, Rosemary Wilkinson, Margaret Blank of New Harmony, IN; Theresa (John) Bowlby, Paul (Clara) Blank of Olney, IL; brother in law and sister in law, Lawrence and Janice Coan of Mancelona, MI, and several nieces and nephews. She is preceded in death by her husband, Phillip E. Coan; daughter, Margaret “Peggy” S. Duran; mother, Irene (Wagner) Blank; father, Theodore Blank; brothers, Robert Blank, Daniel Blank, Ronald Blank; and numerous brothers and sisters-in-law. A celebration of Life service will be held on Saturday September 26, 2020 in Kalkaska MI at St Mary’s of the Woods Catholic Church from 10 am to 1pm. Services will be at 10:00 a.m., a small luncheon will immediately follow until 1:00 p.m. Church services will require a mask, with the luncheon held outside at the pavilion on premise. In Lieu of flowers the family is accepting donations to help rebuild. Forest Area Credit Union Acct# 188277-000 or Paypal [email protected] Arrangements provided by Wolfe-O'Neill Funeral Home. Our Family Serving Yours.

Ruth Marie (Blank) Coan, 76 of Kalkaska, MI passed away on August 21, 2020 surrounded by her children and grandchildren due to injuries sustained in a house fire the morning of August 19, 2020. She was born to the late Theodore and Irene (Wanger)... View Obituary & Service Information

The family of Mrs. Ruth M. Coan created this Life Tributes page to make it easy to share your memories.

Send flowers to the Coan family.