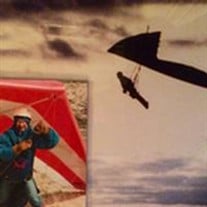 Ronald G. Yatich, 74, passed away January 10, 2017, at the Grand Traverse Pavilions. An avid hang glider pilot and sailor, Ronald was the son of the late George and Dorothy (Boudinot) Yatich. He was born June 5, 1942, in Highland Park, MI. After graduating from Seaholm High School, Ronald earned his Bachelor’s and Master’s degrees and began his teaching career. He would eventually retire from Camp Nokomos after 27 years as a teacher and counselor. During that time he pursued many interests, including climbing Mt. Rainier, becoming a “Looper” sailor, and his real passion hang gliding. He became a life-long active member of the U.S. Hang Gliding Association (USHGA). After completing half of his “Loop” by sailing from Traverse City through Chicago and down the Mississippi River to Florida in his sailboat, “The Sweetie”, Ronald took a fateful flight over Florida. After 4.5 hours of flight and many miles across Florida, he attempted to land his hang glider. His landing became a crash in which he sustained a spinal cord injury among others. Months later in an interview now as a quadriplegic, Ronald reflected upon his life-changing injury. Ronald said that the lesson he learned from hang gliding is, “You are the pilot in charge of your life.”Survivors include his sons, Darrell (Sherry) Yatich of Troy, Scott (Regina) Yatich of West Branch, his grandson Declan and his former wife Kathryn Kesti of Hope, MI. In addition to his parents, Ronald was preceded in death by his brother Arthur and several hang gliding pilot comrades, Harold Austin, Scot Maue, Mark Bolt, Todd Bears, Charlie Kirshner, Dick Dyer and Chris Rider.A Celebration of Life is scheduled for Sunday, January 22, 2017 at 1:00 PM at the Unitarian Universalist Congregation of Grand Traverse. A memorial service with the hang glider association will be held at Greenpoint near Frankfort on Memorial Day weekend. Memorial donations in Ronald’s honor may be sent to the Unitarian Universalist Congregation, 6726 Center Rd., Traverse City, MI 49686 of which he was an active member or the University of Michigan Spinal Cord Injury Model Care System, Dept. of Physical Medicine & Rehabilitation, 325 E. Eisenhower Parkway, Suite 200, Ann Arbor, MI 48108.Condolences can be left online at wolfeoneill.comArrangements were made by Wolfe-O'Neill Funeral Home, our family serving yours.

Ronald G. Yatich, 74, passed away January 10, 2017, at the Grand Traverse Pavilions. An avid hang glider pilot and sailor, Ronald was the son of the late George and Dorothy (Boudinot) Yatich. He was born June 5, 1942, in Highland Park, MI. After... View Obituary & Service Information

The family of Ronald G. Yatich created this Life Tributes page to make it easy to share your memories.

Send flowers to the Yatich family.