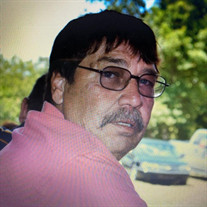 Ronald L. “Ron” Ramsey, 61 of Kalkaska, passed away unexpectedly at his home on Friday, March 20, 2020. Ron was an amazing husband, father and grandfather, great grandfather, brother, son and uncle he delighted in everything his grandchildren did and what was to come for each of them! He had a great love of NASCAR and camping, he was an amazing campground manager and host. So many amazing people he had met, and so many friends that were made. Ron was preceded in death by his twin brother, Donald Loyd Ramsey, father Howard Ramsey Jr.; grandparents, Opal and Howard (Champs) Ramsey Sr., they raised one hell of a man! Ron was also preceded in death by a granddaughter, Eudora Jean and one great-grandchild; his father-in-law, Carl Birdsall and his stepfather, A.J. Curry, and a niece, Thelitha Root. Ron is survived by the love of his life and the center of his world his wife, Kelly J. (Birdsall) Ramsey; daughters, Melissa Flory and Sabrina Davidson; grandchildren, Kennedy and Morgan Flory, Dakota Brandt and Cameron Davidson Trevor, Tannor and Taylor (Patricia Jacelynn, Ellianna and Lincolnn ) Blackwell and great-grandson, Oliver Bradley Harris (the twinkle in his eye); his mother, Grace (Sizemore) Curry; his mother-in-law Wilma Birdsall; his sisters, Deb (Frank) Barnes and Susan (Ron) Cooper sister-in-laws, Dodi (Mike) Fisher, Sue (Ray) Woodruff, and brother-in-law Brian (Michelle) Birdsall; many nieces, nephews, great nieces and nephews, and so many beloved other family and friends. ❤️ Ohana means family and family means no ones left behind Celebration of Ron’s life will be held at a later date. Cremation arrangements provided by Wolfe-O’Neill Funeral Home. Our Family Serving Yours.

Ronald L. &#8220;Ron&#8221; Ramsey, 61 of Kalkaska, passed away unexpectedly at his home on Friday, March 20, 2020. Ron was an amazing husband, father and grandfather, great grandfather, brother, son and uncle he delighted in everything his... View Obituary & Service Information

The family of Mr. Ronald Lee Ramsey created this Life Tributes page to make it easy to share your memories.

Send flowers to the Ramsey family.