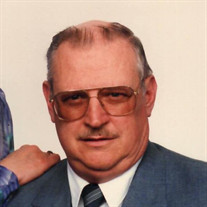 Ronald W. Cox, 83, of Rapid City, passed away on Tuesday, January 23, 2018 at KMHC – Eden Center in Kalkaska. He was born on November 16, 1934 in Protection, Kansas the son of the late Willard and Thelma (McFarland) Cox. Ron was a veteran serving our country honorably in the Air Force. He married Gloria Mariage on December 25, 1957. Ron was a computer analysist until retirement from GM and EDS. He was a past commander of the VFW Post in Central Lake and an active member of Rapid City Church of Christ. Hobbies included fishing, bowling, golf , woodworking and adult coloring. An avid Detroit Tiger fan and played minor league baseball when he was younger. Ron is survived by his wife, Gloria (Mariage) of 60 years; children, Randy (Mary) Cox of North Carolina, T. (Karen) Cox of South Carolina and GiGi (Andrew) Cocking of Williamsburg; grandchildren, Leah (Chris) Cox-Thomas, Benjamin Cox, Erik Cox, Caitlin Cox, Torry (Julie) Cox, Jordan (Ashley) Cox, Elliott (Ashlyn) Cox, Bennett Cox, Hailey Cocking, Conor Cocking; 6 great-grandchildren; and many nieces and nephews. Funeral services will be on Saturday, January 27th at 11:00 am at Wolfe-O’Neill Funeral Home with visitation beginning an hour prior to the service. In lieu of flowers memorials may be made in Ron’s behalf to the Kalkaska VFW Post 8684, 408 Hyde St., Kalkaska, MI 49646 Arrangements were made by Wolfe-O’Neill Funeral Home, our family serving yours.

The family of Ronald Willard Cox created this Life Tributes page to make it easy to share your memories.

Send flowers to the Cox family.