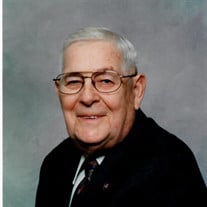 Robert J. Parent, Jr., 91, lifelong resident of Hale, slipped into eternity on October 3, 2020. He was born on August 8, 1929 in Utica, the son of the late Robert J. and Pauline (Horning) Parent, Sr. A veteran who honorably served in the US Army, he met and married his sweetheart, Doris Snow, while serving in Dugway, UT. They married on October 9, 1954 in Clawson, UT. When Bob was discharged, they moved “home” to Hale to the family homestead. Bob was a man of few words, but he loved his family and enjoyed making his grandkids laugh. For most of his life, he was an avid hunter and fisherman, and his love for nature and being in the forest was endless. One of his many loves was taking his grandkids for rides on his John Deere and in the tractor bucket through the trails on his property or the wagon he made. He enjoyed Johnny Cash, western movies, the accordion, and carpentry. An independent thinker who was self-taught he started his own business making pallets in downtown Hale and then relocated to his property on M-65. Because of growing up during the depression Bob was successful at fixing almost anything that was broken. One of the traits he valued most was hard work and encouraged his family to follow their dreams using this trait. At the end of a nice, summer day, he could be found with his family sitting around a campfire enjoying their company. Bob was a man unlike any other. A devoted member of the Church of Jesus Christ of Latter-day Saints in Oscoda, he served faithfully in many organizations. His love for God and country was passed onto his posterity. Bob is survived by his children, Debbie (Dave) O’Neill of Kalkaska, Lynn (Dawndul) Parent of Hale, Shirl (Ed) Karn of Hale, Steve (Sue) Parent of Hale and Connie (Mark) Melville of Monument, CO; 19 grandchildren, Jenifer O’Neill, Natalee (Adam) Haver, Tylor (Catherine) O’Neill, Kodee O’Neill, Jessica (Cody) Davis, Ethan Parent, Rachel Parent, Caleb (Jen) Parent, Sarah (Jeremy) West, Melanie (Brian) Gilbert, Heather Karn, Tasha Karn, Rob (Ashley) Parent, Bethany Parent, Katie (Ryan) Koopman, Joanie (Aaron) Greene, Mitch (Hana) Melville, Kelli Melville and Emilee Melville; 20 great grandchildren, Amber, Rylee, Sydnee, Khloee, Hendrix, Lennon, McKenna, Leland, Jamie, Anna, Emmy, Oliver, Lucas, Eddie, Steven, Macy, Braxton, Gabriella, Mark and Gordon; siblings, Jim Parent, JoAnn Fraser and John Parent. Proceeding Bob in death is his beloved wife, Doris; grandsons, Shayne O’Neill, Troy O'Neill; siblings, Doris Parent, June Pilot, Paula Carter, Ruthann Borsh, Bill Parent. Due to the limitations of COVID-19 a private funeral service will be held for family with a burial at Evergreen Cemetery in Hale. Arrangements were made by Wolfe-O’Neill Funeral Home, our family serving yours.

Robert J. Parent, Jr., 91, lifelong resident of Hale, slipped into eternity on October 3, 2020. He was born on August 8, 1929 in Utica, the son of the late Robert J. and Pauline (Horning) Parent, Sr. A veteran who honorably served in the US... View Obituary & Service Information

The family of Robert J. Parent Jr. created this Life Tributes page to make it easy to share your memories.

Send flowers to the Parent family.