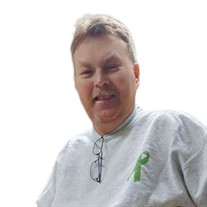 Robert Lawrence Farnsworth, 56, passed away peacefully at his home in Interlochen, Michigan on Tuesday, June 9, 2020. Rob was surrounded by those he held dearest, including the love of his life, his wife Dawn Farnsworth. Rob was born on January 15, 1964 in Onekema to Dennis and Shirley (March) Farnsworth. He graduated from Onekema Consolidated School in 1982 and lived in Northwest Michigan his whole life. For the past 10 years, Rob worked with his “bros” at Behler Young Company in Traverse City. Prior to that, he worked at Tommark, also in Traverse City. If you wanted to find Rob on a Sunday afternoon, you would find him at home watching his favorite Nascar or football team. Rob also enjoyed a good round of golf, camping, and spending time with his wife and beloved golden retrievers – Bella, Kelli, and Duke. Rob was a loving father and the kind of guy that would do anything for anyone, without asking or expecting anything in return. Those that knew him well knew him as an honest, hardworking, all-around good guy. He loved to make those around him laugh with his wit and humor. In 2014, Rob went into acute Kidney failure and embarked on a very difficult treatment path. After 2 years of struggle, Rob and his family were graced with a new hope and outlook on life when a total stranger stepped forward to donate one of his kidneys to Rob. That stranger, Greg Hall, soon became like family to Rob and his wife. Rob affectionately called his new kidney “Greg Jr.” For the next 2 years, Rob regained his health and was able to resume a normal life with Dawn and family at his side. In 2018, Robs health took a sudden turn when he was diagnosed with gastric cancer. Rob battled the disease valiantly over the next 2 years but ultimately ended up back in kidney failure as doctors worked to fight the cancer. Rob was surrounded by those he held dearest at the time of his passing. Rob is survived by his wife Dawn Farnsworth; three sons, Josh (Nycole) Morley of Rapid City, Scott Farnsworth of Bear Lake and Seth Farnsworth of Manistee; his parents Dennis and Shirley Farnsworth of Arcadia; mother-in-law Marzie Skocelas of Manistee; siblings Thomas (Ginger) Farnsworth of Arcadia and Shelly (Ryan) Hisem of Interlochen; brother-in-law Robert Skocelas of Manistee, 4 grandchildren, a grandson on the way and 5 nephews. Rob is proceeded in death by his sister Kimberly Farnsworth; father-in-law Stan Skocelas; grandparents Lawrence and Mabel (Conklin) Farnsworth, Robert and Rita (Smith) March; aunts, uncles and cousins. According to his wishes, Rob has been cremated and a memorial service will be held Saturday, June 20, 2020 at 3:00 pm at Blue Bridge Event Centre, 1950 Ellis Lake Road, Grawn, MI 49637. Services will be officiated by Pastor Nick Twomey and there will be a luncheon following the service. The family wishes to thank Dr. John Stanifer and the team at the Munson Dialysis Center for the kind and compassionate care they provided Rob over the past few years. Cremation arrangements provided by Wolfe-O'Neill Funeral Home. Our Family Serving Yours.

Robert Lawrence Farnsworth, 56, passed away peacefully at his home in Interlochen, Michigan on Tuesday, June 9, 2020. Rob was surrounded by those he held dearest, including the love of his life, his wife Dawn Farnsworth. Rob was born on January... View Obituary & Service Information

The family of Mr. Robert L. Farnsworth created this Life Tributes page to make it easy to share your memories.

Robert Lawrence Farnsworth, 56, passed away peacefully at his...

Send flowers to the Farnsworth family.