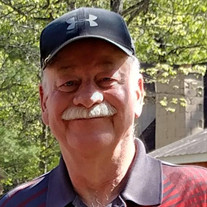 Robert “Bob” Max Ex, 69 of Kaleva, passed away at Munson Medical Center on Monday, January 8, 2018. He was born on September 26, 1948 to the late Walter and Margaret (Goodrich) Ex in Davison, MI. Robert was a family man. He loved spending time with his family, but more specifically, his grandchildren. In his free time, Robert played golf and enjoyed watching the Detroit Red Wings. He is survived by his wife, Gloria Ex; his children, Deanna (Tom) Nagengast, Dane (Jeanese) Ex; his grandchildren, Jacob (Megan Griggs) Nagengast, Joseph Nagengast, Clayton Ex, Braylee Ex; his sister Linda (Tom) Sukup; stepbrother, Bruce Patterson; and many nieces and nephews. In lieu of a funeral service, Robert requested his life be celebrated with his family and friends at a dinner on Sunday, January 28, 2018 from 3 p.m. to 7 p.m. at Fraternal Order of Eagles, 3330 N State Rd. Davison, MI 48423. In lieu of flowers, donations can be made out to the family of Robert Ex. Arrangements were made by Traverse City Cremation Society, prearrangement center.

The family of Robert Max Ex created this Life Tributes page to make it easy to share your memories.

Send flowers to the Ex family.