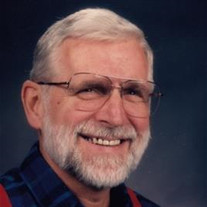 Robert Carstens, known as Bob to family, friends, and work associates, passed away at age 81 on October 29, 2018. He was born in Detroit, MI to parents Catherine and Aldor Carstens. He grew up in Grosse Pointe Farms, a suburb of Detroit. There he attended school until the age of 16. Not wanting to waste the effort of higher education only to become “cannon fodder”, he convinced his father to sign off so that he could join the Marines at the age of 17, and worked on aircraft while stationed in Korea and Japan. While there, he became fascinated with Japanese language and culture. Studying and practicing Japanese became a lifelong hobby. After discharge Bob began his higher education at Ferris State, continuing on at the University of Michigan, receiving a B.A. in Far Eastern Language and Literature. Working to put himself through college, he took a job as a janitor at a special education facility. While working there, he found himself spending time with the kids, including reading J.R.R. Tolkien’s The Hobbit and Lord of the Rings to them in the evenings. These interactions inspired him to change his career direction and obtain a Masters degree in Special Education for the Emotionally Impaired from the University of Michigan. After graduation, he first worked at U of M Children’s Psychiatric Hospital in Ann Arbor. Upon moving to Traverse City, he taught at Arnell Engstrom School for 12 years. The school was a part of the former State Hospital, now known as the Grand Traverse Commons. After the state hospital was closed, he found a new professional home at the TBAISD Adult Work Center, where he worked for 20 years. Bob put an amazing amount of care and energy into his job as a teacher of mentally and emotionally impaired young adults, both in and out of the classroom. It was not uncommon for him to go running or skiing with a group of students after school to prepare them for the Michigan Special Olympics, for which he was a volunteer coach. Of his long career with TBA, Bob was quoted: “My job has been to provide youth with opportunities to acquire knowledge, skills, and habits that will enable them to live productive and fulfilling lives, independently, in their community. To this end, I utilize cooperative learning, the thinking and principles of author and educator Barbara Coloroso, and Special Olympics.” Bob always had an interest in nature that stretched back to his formative years in Grosse Pointe Farms, at a time when it was on the edge of the city. He enjoyed the open countryside and interactions with nature for a few short years. Then urban sprawl took over and completely changed the character of the area, a change which deeply disappointed him. Bob’s interest in nature was rekindled in the late 70’s. What started as a simple way to leave the stress of work behind, birding became a lifelong hobby and passion. He joined the Audubon club and was soon participating in bird counts around the county. He contributed greatly to the Michigan Breeding Bird Atlas for decades. In the 90’s Bob served on the Audubon Club’s board, as President, and as Vice President for Environment. He also joined the Northern Michigan Environmental Action Council. He was particularly proud of his involvement in surveying the wildlife at Grand Traverse Commons. The team found over 110 species of birds on the property, which helped show its value as wildlife habitat. Bob felt that preserving the open spaces on the grounds would also enhance the quality of life for area residents. After his retirement from teaching, he turned his full attention to conservation matters. He worked to preserve natural areas for future generations in a number of ways beyond birding. He served on the Michigan DNR Frog and Toad Survey for 10+ years. He monitored water quality for five stream watersheds. His interest in conservation led him to serve on a number of committees and boards involved in land use, transportation, and preservation of farmland and natural areas. This included the TC-TALUS and Grand Vision committee, the Acme Township Planning Commission, and Grand Traverse County Planning Commission. His dedication and accomplishments in planning and conservation were recognized in the form of numerous awards such as the NMEAC Clarence Kroupa Lifetime Achievement and Environmentalist of the Year awards in 2000, 2002 Grand Traverse Land Conservancy Volunteer of the Year, 2010 Frank Purvis Stewardship Award for Citizen Planning, and 2011 Distinguished Citizen Planner Award. Bob’s efforts to document the wildlife in various natural areas were often written about in articles in local magazines and newspapers. In an article in the Outlook magazine, July 2005, Bob was quoted as saying, “These natural areas are such fantastic assets to have in our community. People will look back someday and thank us for our foresight in preserving them.” This one quote really sums up Bob’s motivation behind all his conservation efforts in the region. Bob’s other interests included reading avidly (especially philosophy and science fiction), woodworking, listening to classical music, studying and practicing Japanese, and singing and playing folks songs on his guitar. Bob is survived by two daughters, Heather Foxman and Megan Carstens, who reside in Madison, WI. Sisters Marilynn and Kathleen preceded him in death, and he is survived by sisters Carol and Judy. Bob would have liked people to honor his memory by getting outside and enjoying the beauty of nature. Also, please vote and consider getting involved in local efforts to protect the natural beauty and resources of the Grand Traverse area. A private memorial was held in November. Bob’s daughters cordially invite you to share your memories and stories using this online forum

Robert Carstens, known as Bob to family, friends, and work associates, passed away at age 81 on October 29, 2018. He was born in Detroit, MI to parents Catherine and Aldor Carstens. He grew up in Grosse Pointe Farms, a suburb of Detroit. There... View Obituary & Service Information

The family of Robert Carstens created this Life Tributes page to make it easy to share your memories.

Send flowers to the Carstens family.