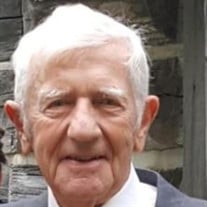 Richard Norbert Stosio, age 91 of Rapid City, passed peacefully surrounded by his family the evening of Saturday, February 20, 2021. Richard was born on September 14, 1929, to the late Joseph and Helen (Szczepanski) Stosio in Detroit, Michigan. Richard graduated high school from Saint Mary’s Preparatory in 1948. After his army service, he earned a master’s degree in psychology leading to a career beginning in teaching at Epler Junior High and then continuing as a High School guidance counselor at Utica and Eischower High School for the Utica Community Schools. He was always a hard worker and provider for his family. Richard did odd jobs, was a Real Estate salesman, and started three successful businesses, Rochester Rental, Party Place and Rochester Lawn service. Richard enlisted in the army during the Korean Conflict serving in Germany as a Teletype operator in the Signal Corp. Richard enjoyed sports participating in baseball, football and basketball, later in life bowling and golf. He played his last 18th hole at age 90. All the while, he made room for family. Richard married Irene Trojanowski July 14, 1956, in Detroit at Corpus Christi Catholic Church, they have been married for 65 years. Richard is survived by his loving wife, Irene Stosio; his children, Richard Stosio, John (Debra) Stosio, Ann (Thomas) Simms, Robert Stosio, Gerald Stosio, and Gary (Kelly) Stosio; fourteen grandchildren and four great-grandchildren. He was preceded in passing by his sister, Genevieve. Richard was devoted Christian who was active member of Sacred Heart Roman Catholic Church in Elk Rapids, where he volunteered his time as an usher, Eucharistic minister to the sick and an Alter server. He had a concern for the less fortunate and generously gave to charities that served people around the world. Richard was much loved and will truly be missed by every life he has ever touched. A mass will be held on Wednesday, February 24, 2021, at Sacred Heart Catholic Church, 143 Charles Street, Elk Rapids, MI at 11:00 a.m. Father Robert Zuchowski officiating. A visitation will begin at 10:00 a.m. at church. Interment will take place in the spring at Sacred Heart Catholic Cemetery Elk Rapids. Memorials made be made to the Sacred Heart Catholic Church, Elk Rapids. Arrangements provided by Wolfe-O’Neill Funeral Home, our family serving yours.

The family of Richard N Stosio created this Life Tributes page to make it easy to share your memories.

Send flowers to the Stosio family.