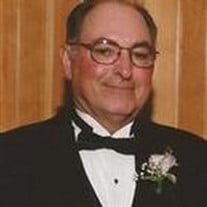 Richard “Dick” Van passed away on Friday, February 17, 2012 in Florida. He was born on February 25, 1942, the son of the late Herbert “Peanut” and Agnes (Henderson) Van. He was one of six children born to his parents in Rapid City.Dick owned his own construction company and built pole barns all over the state of Michigan. If you drive around you can see many of his pole barns in the surrounding counties. He enjoyed hunting and spending time at his cabin in Alden. Dick also enjoyed his 1964 ½ Ford Galaxy. He loved to shine it up and take it to car shows. Dick retired a few years ago and vacationed in Ladylake, Florida, where he enjoyed the sunshine, going to auctions and riding around on his golf cart. Dick made several wonderful friends.Surviving Dick are his children, Terri (Peter) Norick, Shari Smith, Mark White, Vici Van and Patricia (Rodney) Donaldson; his grandchildren, Josh, Molly, Zac (Alanna), Peter and Daniel Norick, David and Solomon Jensen, Isaac and Reuben Smith, Robert, Brittany and Jacob White, Mckenzie, Chance and Tucker Donaldson; his siblings, Herbert Van, Edward Van and Sally (Jim) Dunson; very special friends, Daniel (Peggy) Grosse; and many nieces, nephews and lifelong friends.Dick was proceeded in death is his brother, Greg Van; and sister, Rhonda Vasher.A memorial service will be held on Saturday, May 26, 2012, at 1:00 pm at Wolfe-O’Neill Funeral Home with Elder Zeke Henderson of the Antrim Church of Christ officiating. Burial will follow in Clearwater Township Cemetery.Condolences can be left online for the family at www.wolfeoneill.com.Arrangements were made by Wolfe-O’Neill Funeral Home, our family serving your.

The family of Richard "Dick" Van created this Life Tributes page to make it easy to share your memories.

Send flowers to the "Dick" family.