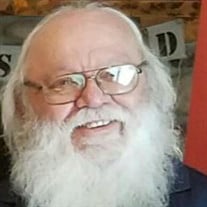 Patrick “Corky” G. Hubble, 63, of Rapid City, passed away suddenly on Tuesday, December 12, 2017. He was born on December 22, 1953 to the late Emery “Don” and Helen (McIntosh) Hubble in Kalkaska, MI. Pat retired from the union as a Millwright Local 1102 after 30 years of hard work. He married the love of his life, Renee Mattiassi on October 16, 2004 and relocated to California for a short time. Upon their return to Michigan, Pat found great joy in watching his nephews and their teammates play various sports. Pat quickly became known as “Uncle Pat” which many adults still refer to him as today. He enjoyed spending time with his wife, dog Willie, and helping with all things Blazer. Pat’s passion for the youth of Kalkaska drove him to work endless hours raising money for the new Kalkaska Public School baseball field. He interacted often with the community playing the role of Santa Claus. He enjoyed watching the excitement the children had as much as they enjoyed giving Santa their wishlists. He was a Trustee of the Clearwater Township Board, a proud volunteer of the Kalkaska Historical Society, Class of 1972 ambassador, member of the Kalkaska Moose Lodge #2348, and a “True Blue Blazer” fan. Pat is survived by his wife, Renee Hubble; his children, Ian Hubble of Standish and Travis Hubble of Bay City; his stepchildren, Nicholas (Jen) Mattiassi of Santa Rosa, CA, Jevon Mattiassi of San Francisco, CA, and Samarra Mattiassi of Petaluma, CA; his siblings, Donald (Loretta) Hubble, Dennis (Sandy) Hubble, Susan Vowels, and Michael (Gail) Hubble, his two grandchildren, and several nieces and nephews. He is preceded in death by stepson Austin Mattiassi, his parents, his brother Garry Lee Hubble and brother-in-law and best friend Sam Pashigian. Visitation will take place 10am-12pm on Friday, December 15 with services starting at 12:00 p.m. at Kalkaska Church of Christ, 1725 W. Kalkaska Rd., Kalkaska, MI. In lieu of flowers, the family is requesting memorial contributions be made to Kalkaska Public Schools c/o Baseball Field Project. Arrangements were made by Wolfe-O’Neill Funeral Home, our family serving yours.

The family of Patrick "Corky" G. Hubble created this Life Tributes page to make it easy to share your memories.

Send flowers to the Hubble family.