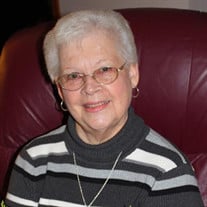 Patricia L. Sevick, 90, passed away peacefully in her sleep on Tuesday, June 2, 2020. She was born in Lansing on December 15, 1929 to the late Harold and Mildred (Blythe) Mitchell. Pat graduated from Sexton High School in 1948. After graduation, she worked at Michigan Bell Telephone Company, starting out as an operator, and eventually being promoted to a supervisory role. In 1954, Pat married Donald Sevick. They met on a blind date and that night Don went home and told his mother, “I’ve met the girl I’m going to marry.” Together they enjoyed 59 years of marriage before his passing in 2013. She was devoted to Don’s well being as well as his many business endeavors. She is survived by her daughters, Janet (Dan) Walton of Traverse City and Marilyn (Ron) Barber of Traverse City, as well as a granddaughter, Melissa Lovejoy (Tiernan Cole), of Port Charlotte, Florida, a sister, Judy Powell of Lansing, as well as many nieces and nephews. She also leaves behind good friends Norm and Pat Gidcumb of Thompsonville and Brad (Pam) Lentz of Beulah. Pat’s hobbies included needlework, travelling, playing cards, and spending time with her friends and family. She was well known for her cooking and her family will miss the love she added to her recipes, especially her stuffing, calico beans, and pumpkin pie. Pat was preceded in death by her parents, her husband, and her siblings Jerry Mitchell, Joyce Musgrove, and Barbara Longest. In light of the Covid-19 virus, the family will celebrate Pat’s life at a private gathering later this summer. In lieu of flowers, memorial contributions may be made to Camp Quality Michigan, P.O. Box 345, Boyne City, MI 49712 or the Munson Manor Hospitality House, 1220 Medical Campus Drive, Traverse City, MI 49684. The Sevick family would like to give special thanks to the staff at Bay Ridge Apartments and Assisted Living for the care and compassion they showed Pat; she made many friendships during her seven years at the facility. The family is being served by Wolfe-O’Neill Funeral Home and Cremation Services.

Patricia L. Sevick, 90, passed away peacefully in her sleep on Tuesday, June 2, 2020. She was born in Lansing on December 15, 1929 to the late Harold and Mildred (Blythe) Mitchell. Pat graduated from Sexton High School in 1948. After graduation,... View Obituary & Service Information

The family of Mrs. Patricia L. Sevick created this Life Tributes page to make it easy to share your memories.

Patricia L. Sevick, 90, passed away peacefully in her sleep on...

Send flowers to the Sevick family.