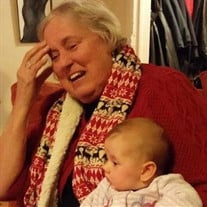 Nancy Louise Warne (Herbst) of Traverse City Michigan passed away on May 2, 2019. She was lovingly surrounded by her daughter Candace, brothers Andy and Tom, and grandchildren Christian and Ivy as she entered into eternal rest. The eldest of 7 children, Nancy Louise Herbst was born to Marian Louise (Cheney) Herbst and Hubert Mensch Herbst in Flint Michigan on February 11, 1941. Raised in rural Iowa, Nancy went on to attend Northern Michigan College in Traverse City, followed by Iowa State University where she earned her Bachelor of Science in Mathematics. After graduating in 1963 she joined the Peace Corps, which took her to Malaysia where she lived and served until 1965. Nancy had a robust career, starting as a secondary math teacher and eventually retiring as the Judicial Secretary for the Chief Justice of the Michigan Supreme Court in 2005. Even after retirement, Nancy’s undeniable work ethic led her to employment in the Old Mission Post Office, a short drive from her beautiful log home near Mission Point that she and her husband Dave built from the ground up almost 30 years ago. She found great joy in meeting and conversing with the locals, while being just across the street from her beloved Hazerot Beach. Nancy was also a dedicated member of the Old Mission Historical Society and worked tirelessly on the restoration of the historical Dougherty House. She was admirably described as “having more energy than 10 people,” which she poured into her many hobbies; including gardening, bird watching, crocheting, embroidery, making homemade maple syrup, rock polishing, and just about anything that involved the woods or nature. Nancy was the proud mother of two children, Candace Lee and James Robert Clark. She later married David Charles Warne, with whom she spent the last 3 decades of her life. Together, the two have 13 grandchildren and 2 great grandchildren. Nancy was a generously devoted grandmother who took great pride in helping to nurture and provide for her many grandchildren, especially Ivy Rose who admirably considered her to be a mother figure. Nancy was preceded in death by both parents, her son James, her brother Richard Herbst, and her sister Adrienne Herbst. She is survived by her 4 siblings; Calvin Herbst, Dorothy (Herbst) Goodwin, Tom Herbst, and Andrew Herbst; her loving husband David Warne, her daughter Candace Martinez and 6 biological grandchildren; Christian Gillman, Elizabeth “Bethy" Bell, Ivy Rose Bell, Alexander Martinez, Sophia Martinez, and Gwynevere Martinez, as well as her great granddaughters Bella Tardiff and Lyla Morse. As a selflessly devoted wife, mother, grandmother, sister, and community member, Nancy was a pillar of strength for all those lucky enough to be around her. She will be eternally missed and remembered as a remarkably extraordinary woman that left a permanent impression on the hearts of many. As her daughter Candace put it, “she is not gone, she is just on to the next adventure.”

Nancy Louise Warne (Herbst) of Traverse City Michigan passed away on May 2, 2019. She was lovingly surrounded by her daughter Candace, brothers Andy and Tom, and grandchildren Christian and Ivy as she entered into eternal rest. The eldest of... View Obituary & Service Information

The family of Nancy L. Warne created this Life Tributes page to make it easy to share your memories.

Send flowers to the Warne family.