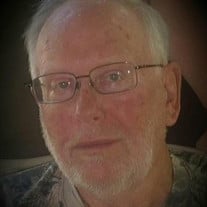 Murray Garner was an outdoorsman at heart. He loved being outside, fishing, hunting, camping, canoeing, hosting bonfires and/or spending time with his family and friends. If he couldn’t be outdoors doing what he loved then he was watching it on cable television, reading about it or talking about it. Murray Lee Garner, Sr. of Kalkaska passed away unexpectedly Friday, January 8, 2021. He was 77. He was born May 7, 1943 to the late Kenneth and Myndwell (Graves) Garner. He graduated from Kalkaska High School in 1961. He attended Northwestern Michigan College after graduation. He immediately started working at Wayne Wire Cloth Inc. and continued to work there for the next 45 years. To this day, he is the only employee to have worked at the company for that many years, to include owners and previous owners. In 1962, he married his high school sweetheart, Pauline Kroesing, of Fife Lake. Together they have lived in his family home, referred to as “The Farm” where they raised their two children, Murray “Lee” and Catrina. The Farm was built in 1923 by Murray’s dad, Kenneth and was given as a wedding present to Murray and Pauline, along with 100 acres. His parents built a small home next door where they lived until their passing in 1967 & 1997. Murray lived his entire 77 ½ years in the same home. If you have the urge to spend money, Murray would not want you to waste your money on flowers for his service. He instead, would want you to plant flowers or a tree, or do something nice with your family in his memory, or save your money for a rainy day. He lived a full and happy life and we honored to have been a part of his “dash” (1943 – 2021) between the day he entered this world and the day our good Lord took him to a better place to hunt and fish. Left behind to carry on his “legacy” (which will not be easy): his beloved wife of 59 years, Pauline Alice (Kroesing) Garner; his children, Murray “Lee” Garner, Jr., Catrina Marie Johnston and her husband, Michael Johnston (who Murray & Pauline refer to as “son”); his grandchildren, Sydney Lee Roberts, of Anchorage, Alaska, and Camryn Ty Roberts of Traverse City and “the Farm”. He leaves behind three sisters-in-law, whom he loved to pick on: Betty, Alice, and Mickey. Not to mention, many cousins, nieces, nephews, and people he considered family; Tim, Al & Michelle Jackson, Eric, Kara & James Peck, Brad Birgy and Star Ann Hayden A small service is planned on Saturday, January 16,, 2021, at the Church of Christ in Spencer (Kalkaska). The service will begin at 2:00 p.m., proceeded by an hour of time to visit, tell stories, and view many pictures. Due to Covid-19, there will be no luncheon following the services. However, the family will be hosting a Celebration of Life at the Farm on Memorial Day Weekend, for all to attend. (Details to follow). Cremation arrangements provided by Wolfe-O’Neill Funeral Home, our family serving yours.

Murray Garner was an outdoorsman at heart. He loved being outside, fishing, hunting, camping, canoeing, hosting bonfires and/or spending time with his family and friends. If he couldn&#8217;t be outdoors doing what he loved then he was watching... View Obituary & Service Information

The family of Murray L Garner created this Life Tributes page to make it easy to share your memories.

Murray Garner was an outdoorsman at heart. He loved being outside,...

Send flowers to the Garner family.