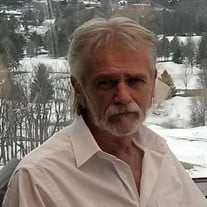 Michael Lee Carpenter, age 71, of Kalkaska, passed away unexpectedly on April 1, 2019. He will be dearly missed. Mike was born on 23rd of July 1947 in Detroit and spent his early years in Roseville as the oldest of six siblings. In 1965, he graduated with honors from Roseville High School and went directly into the United States Army. He served in the military from 1965 to 1968, including two stints in Vietnam, for which he was awarded the Combat Artillery Badge and the Purple Heart medal as a Combat Construction Specialist, 4th US Army. He also earned the Sharpshooter Badge, National Defense Service Medal, Meritorious Unit Citation, Vietnam Service Medal and the Vietnam Campaign Medal. After his return home, Mike earned a BS in Design Engineering, spent his career in the automotive industry, and subsequently retired from Modern Engineering in Novi. Mike raised a family of five children, often as a single dad. In 2013, he moved to Kalkaska, where he cared for his father. As a Vietnam War veteran, he continued to help his brothers and sisters in arms as an active member in the community support network. To his last day, the discipline, patriotism and affection for his comrades Mike acquired in the Army never left him, as friends and family will attest. Michael is survived by his father, Gerald J. Carpenter, five siblings: Susan Jessup, Sally Goodale, Monte Carpenter, Shawn Henriksen, and Morgan Carpenter, his children: Matthew Carpenter, Jessica Carpenter, Jeremiah Carpenter, David Carpenter, Sean Carpenter, and stepchildren, Breein Williamson and Kristopher Williamson. Michael also leaves behind sixteen grandchildren. He was preceded in death by his wife, Michelle Carpenter, mother, Eleanor (Toby) Carpenter, and daughter, Melanie Carpenter. A military burial service will be held at 3pm on Saturday, May 4th at the Evergreen Cemetery in Kalkaska. Afterwards, his family invites friends to gather at the Kalkaska VFW to celebrate and honor Mike’s life. Arrangements were made by Wolfe-O’Neill Funeral Home, our family serving yours.

Michael Lee Carpenter, age 71, of Kalkaska, passed away unexpectedly on April 1, 2019. He will be dearly missed. Mike was born on 23rd of July 1947 in Detroit and spent his early years in Roseville as the oldest of six siblings. In 1965, he... View Obituary & Service Information

The family of Michael Lee Carpenter created this Life Tributes page to make it easy to share your memories.

Send flowers to the Carpenter family.