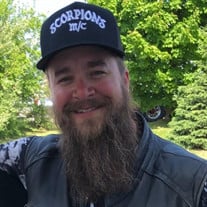 Mason John Mikowski, 40 of Kalkaska, MI passed away Monday June 29th 2020 at home.Mason was born on March 4th 1980 in Traverse City, MI, the son of Peter and Kathleen (Taber) Mikowski. He graduated from Suttons Bay High School in 1999. Upon graduating, he apprenticed with Glen Weber at Glen Arts Studio to pursue his dream of becoming a tattoo artist. In the interim he worked at Technology 2000 as a body shop technician, where he met the love of his life, Nikki Maxbauer. He later worked for Tower Automotive and during this time he also started working at Rare Breed Tattoo. His passion for tattooing only grew after that. He opened his first tattoo shop, Flippin’ Ink in Traverse City, MI which he later sold. Soon after, he opened Bayside Tattoo on Munson Ave. in Traverse City. Mason was a man with a flair for life. He lived his life to the fullest with everything that he did. Once he set his mind on something, there was no stopping him. Whether that be his passions for hunting, fishing, shooting/collecting guns or riding motorcycles, he dove in head first, all or nothing. He took great pride in the work and travels it took to meet all of his brothers and to become a patch holder of the Scorpions Motorcycle Club. He was a man whos generosity knew no bounds. Lending a helping hand or a few dollars to get someone by was a common occurrence. Anyone who ever met him or had the pleasure of sitting down in his tattoo chair, could tell you he was by far one of the most genuine human beings they ever met. His ability to see the good in everyone and every situation was unmatched. At the end of everyday he was a true family man, his love for Nikki and Harley was never ending. Mason is survived by his true love, Nikki Maxbauer; son Harley Maxbauer; mother Kathleen Mikowski; a brother Jerry Mikowski; a sister Delayna Mikowski; niece Macey Steffens and nephew Jaxson Simmons. He was preceded in death by his father, Peter John Mikowski. Visitation will be held on Saturday, July 11, 2020, at St. Patrick's Church in Grawn, MI between 11:00 am-12:00 pm for close family members and friends with a Memorial service immediately following, officiated by FR. Kenneth Stachnik. (Memorial Service attendance is 130 max) A gathering for the celebration of his life will take place at the Scorpions Motorcycle Clubhouse, 7206 Scotchwood Lane, Grawn MI 49637 following the service, all are welcome. In lieu of flowers, Memorials may be directed to Mason’s family. Cremation arrangements provided by Wolfe-O'Neill Funeral Home. Our family serving yours.

Mason John Mikowski, 40 of Kalkaska, MI passed away Monday June 29th 2020 at home.Mason was born on March 4th 1980 in Traverse City, MI, the son of Peter and Kathleen (Taber) Mikowski. He graduated from Suttons Bay High School in 1999. Upon... View Obituary & Service Information

The family of Mr. Mason J. Mikowski created this Life Tributes page to make it easy to share your memories.

Send flowers to the Mikowski family.