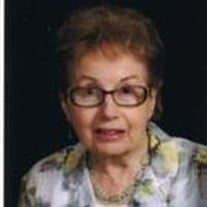 Margaret Rose Vyverberg, 78, passed away on Tuesday, December 28, 2010 at her home in South Boardman, Michigan. She was born on June 10, 1932 in Big Bay, Michigan, the youngest daughter of Anton and Elizabeth (Puskarick) Rose.Margaret attended All Saints Catholic School in Gladstone and graduated from Gladstone High School in 1950 where she especially enjoyed cheerleading. After graduation from high school, Margaret was employed by Nesco in MIlwaukee, WI. Later she worked for Hupy Insurance in Gladstone where she resided until 1985. On June 1, 1985 Margaret married Frank Vyverberg and moved from Escanaba to South Boardman. She worked for the Kalkaska Soil Conservation District as the administrative assistant until her retirement. Margaret was an active member of St. Mary of the Woods Catholic Church. Her faith was an integral part of her life.Margaret loved life. She enjoyed a good play, shopping, a fine meal, classical music, new experiences, but most of all the company of friends and family. Margaret's loving, gracious and compassionate manner will be greatly missed by all who knew and loved her.She is survived by her loving husband of 25 years, Frank; her daughters, Debbie (Dave) Cappeart of Escanaba and Beth Bartol of Steven's Point, WI; her step-son, Randy (Norma) Vyverberg of Mayfield; 6 grandchildren; 3 great-grandchildren; and her sister, Catherine (John) Kroll of Escanaba.Margaret was preceded in death by her parents and her sister Mary.Visitation will be held on Friday, December 31, 2010 at Wolfe-O'Neill Funeral Home in Kalkaska from 5-8 p.m. with a prayer service at 7:00 p.m. The funeral service will be on Saturday at St. Mary of the Woods with Reverend Norman J. Dickson, S.J. officiating. Burial will take place April 27, 2011 at 2 p.m. at Lodi Cemetery. Condolences may be left on-line at www.wolfeoneill.comArrangements were made by Wolfe-O'Neill Funeral Home, our family serving yours.

Margaret Rose Vyverberg, 78, passed away on Tuesday, December 28, 2010 at her home in South Boardman, Michigan. She was born on June 10, 1932 in Big Bay, Michigan, the youngest daughter of Anton and Elizabeth (Puskarick) Rose.Margaret attended... View Obituary & Service Information

The family of Margaret B. Vyverberg created this Life Tributes page to make it easy to share your memories.

Send flowers to the Vyverberg family.