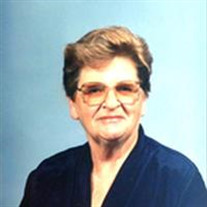 Margaret Ann Tucker, 88, of Kalkaska, passed away on October 1, 2015 at KMHC-LTC. She was born on July 2, 1927 in Detroit, the daughter of the late John and Margaret (Curran) Hickey.Margaret graduated from St. Gregory's High School in Detroit in 1944, and briefly attended music school in Detroit. Margaret married Kenneth G. Tucker on December 6, 1949. Margaret and Ken moved to Kalkaska, Ken's hometown, in 1958 and raised their six children there. An active member of St. Mary of the Woods Catholic Church throughout her life, Margaret most recently served as Eucharist minister and usher, and over the years had been involved in rolls within the congregation including choir, altar Society, and lecture. Margaret also volunteered at KMHC, and worked for KPS as a bus aide until her retirement. She enjoyed gardening, reading, and participating in the swim program for seniors at the Kaliseum. Margaret took great joy in her family and friends, was known for her patience and humor, and her bread and pie baking.Survivors include her children, D. Andrew (Connie Coon) Tucker of Kalkaska, Paul (Mary) Tucker of Toledo, OH, Margaret (Del Rogers) Jimerson of Naples FL, Tricia (Gary) White of Tybee Island, Georgia, Elizabeth Tucker of Spalding and Patrick Tucker of Kalamazoo; grandchildren, Jason, Melissa, Margaret, Sharon, Aaron, Andrew, Rachael, Veronica and David; 10 great-grandchildren; siblings, M. Nora Allen of Waterford, J. Michael (Jon Boyd) Hickey of Detroit, and sister-in-law, Wanda (John) Osborne of Contoocook, NH.Margaret was proceeded in death by her husband, Kenneth; and siblings, Aileen Conder, Joe Hickey and Jack Hickey.Visitation will be on Sunday, October 4th from 5:00 pm – 8:00 pm at Wolfe-O’Neill Funeral Home, the prayer service will be at 7:00 pm. The funeral mass is Monday at 11:00 am at St. Mary of the Woods Catholic Church with Reverend Norman Dickson, SJ, officiating. Memorials may be given to St. Mary of the Woods Catholic Church, Kalkaska Public Library, the Kaliseum or St. Gregory's Alumni Association.

Margaret Ann Tucker, 88, of Kalkaska, passed away on October 1, 2015 at KMHC-LTC. She was born on July 2, 1927 in Detroit, the daughter of the late John and Margaret (Curran) Hickey.Margaret graduated from St. Gregory's High School in Detroit... View Obituary & Service Information

The family of Margaret Ann Tucker created this Life Tributes page to make it easy to share your memories.

Margaret Ann Tucker, 88, of Kalkaska, passed away on October...

Send flowers to the Tucker family.