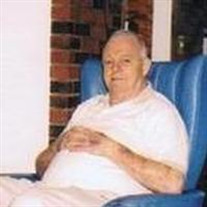 Lewis F. White, 75, passed away at his home in Williamsburg on Sunday, August 30, 2009. He was born on February 13, 1934 in Petoskey to the late Allen and Ada (Howell) White.Lewis married Ida “Jean” Taylor on February 11, 1956 in Mancelona. Together they raised 3 wonderful children. Lewis proudly served his country as a member of the US Marine Corp. during the Korean War where he received a purple heart. Lewis retired from Ford Motor Company in 1986 after 31 years of service. He was a member of the American Legion Post in Mancelona. Lewis enjoyed hunting and fishing. He loved spending time with his family and friends. Lewis will be deeply missed by all those that knew and loved him.Lewis is survived by his devoted wife of 53 years, Ida; his loving children, Philippa (Frank) Snipes of Prestonburg, KY, Mark Allen (Julie) White of Clive, IA, and Sonya L. White of Kalkaska; his precious grandchildren, Terasa Music and Joseph Snipes; his cherished great-grandson, Joshua Music; and his dear sister Wanda Hughey of Colorado.Lewis is preceded in death by his parents; and his siblings, Bonnie, Robb, James, and William. Visitation for Lewis will be held on Wednesday, September 2, 2009 from 5 – 8 p.m. at Wolfe-O’Neill Funeral Home. The funeral service will be held on Thursday at 11:00 a.m. at the funeral home with David W. O'Neill officiating. Burial will be in Evergreen Cemetery.Memorials may be given to Munson Hospice House, 210 Beaumont Place, Traverse City, Michigan 49646.Condolences may be left online at www.wolfeoneill.com .Arrangements were made by Wolfe-O’Neill Funeral Home, our family serving yours.

The family of Lewis F. White created this Life Tributes page to make it easy to share your memories.

Lewis F. White, 75, passed away at his home in Williamsburg on...

Send flowers to the White family.