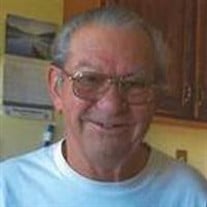 Lawrence B. “Larry” Tyerril, 75, of Kalkaska, passed away on June 9, 2013 at Munson Hospice House in Traverse City surrounded by his loving family. Born on August 26, 1937 he is the son of the late Joe and Eden (Lake) Valentine.Larry was a veteran in the US Army and was stationed in Germany. He met and then married Bente Mikkelsen on April 18, 1958 in Copenhagen, Denmark. Larry worked for 30 years at the V8 Engine Plant of GM in Flint when he retired. His hobbies included woodwork and restoring furniture. He also restored many houses over the years before it became popular to do home improvements. Larry and Bente lived in the same house for 30 years until they relocated at retirement. Larry had a great love for his grandchildren and his great-granddaughter, Delaney, age 2 ½ , became his “Little Buddy”.Surviving Larry is his wife, Bente of 55 years; his children, Steve W. Tyerril of Flint, Dennis A. (Bonnie) Tyerril of Flint and Lynn Rogers of Fife Lake; his grandchildren, Mindy, Kelly, Anna, Bobby, Serene and Steve; his great-grandchildren, Britney, Riley and Delaney.Larry was proceded in death by his sister, Alberta “Allie” and her husband, Clyde Letson and his beloved grandmother, Anna Lake. The funeral will be held on Wednesday, June 12th at 2:00 pm at Wolfe-O’Neill Funeral Home with visitation from noon until the time of service.Memorials may be made to Kalkaska Commission on Aging, 303 S. Coral St., Kalkaska, MI 49646.Condolences can be left online at wolfeoneill.com.Arrangements were made by Wolfe-O’Neill Funeral Home, our family serving yours.

The family of Lawrence B. Tyerril created this Life Tributes page to make it easy to share your memories.

Send flowers to the Tyerril family.