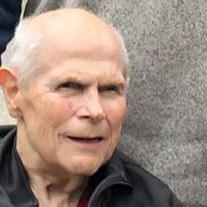 Larry Allen Thomas, age 79 passed away peacefully on Thursday, April 1, 2021, at Grand Traverse Pavilions. Larry was born on February 16, 1942, to the late Robert and Leona (Dietzel) Thomas in Saginaw, Michi-gan. Larry married Emily Jane Pace on June 10th 1966 in Logan Utah. They have been married for 54 years. Larry adored Emily and always wanted her by his side. Larry and Emily moved to Northern Michigan in 1974, first to Eastport and then to Suttons Bay, but living most of their time just outside of Empire and later years in Traverse City. Larry and Emily had a loving marriage that set an honorable example to their sons. When Larry had to live in the Pavilions Emily would spend many hours a week with Larry assisting with his care and tending to things the nurses could not do. Larry’s greatest love was his family and faith. His greatest source of pride was his sons and their families. Though he was successful at his career with Ross Laboratories that was always secondary. In their younger years Larry loved to watch his son’s play basketball or wrestle, he loved seeing them succeed and always encouraged their endeavors. As his family grew he loved to be part of family gatherings as often as possible and especially on the holidays. Larry loved to spend time with his grandchildren. When Larry was in the Grand Traverse Pavilions he looked forward to his grandchildren visiting and pushing him in his wheelchair around the grounds. Larry loved the outdoors, especially hunting and fishing, and would often be found off the shore of Empire or at Rocky Island Ont. long-lining for his next trophy. Larry would spend as much time as he could during the spring and summer fishing and making friends. When he was not fishing he would swim and loved to take his grandchildren to nearby Cedar lake to swim with him. His grandchildren of-ten talk of this when they reminisce. He was a member of the Church of Jesus Christ of Latter-Day Saints in Traverse City, he had great faith in Jesus Christ and was a devoted disciple. Larry volunteered many hours to his church. As a young man Larry served as a missionary in the country of New Zealand, and later served as Bishop to the Traverse City ward and held many other positions throughout the years. Larry took the admonition of Christ to serve others seriously and often took people into his home to help them in times of need. Larry is survived by his loving wife Emily J. Thomas; children, Troy Thomas, Douglas (Tonya) Thomas, and Briant (Susan) Thomas; Melissa daughter-in-law; grandchildren Emily, Casandra, Elizabeth, Sarah, Josselyn, Hayden, Callie, Ella, Andrew, Logan, Ashley, Lauren, and Kendra; sister-in-law's Joann and Jynell, as well as many nieces and nephews. Larry is proceeded in death by his parents Robert and Leona; brothers Robert Jr., Darrel, Donald, Dean, and Dale, and his oldest son Randy. The family would like to acknowledge and thank the caregivers and Hospice workers at the Grand Traverse Pavilions, Aspen unit, for their care over the last 8 years. Private family services will be held. Cremation arrangements provided by Wolfe-O’Neill Funeral Home, our family serving yours.

The family of Larry Allen Thomas created this Life Tributes page to make it easy to share your memories.

Send flowers to the Thomas family.