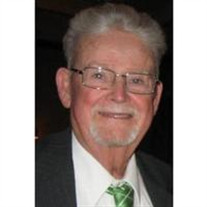 John Frederick Utykanski, Sr., 78, of Petersburg passed away on February 19, 2016 at Henry Ford Wyandotte Hospital in Wyandotte. He was born on January 3, 1938 in Saginaw, the son of the late John and Elizabeth (Mayette) Utykanski.John was a veteran serving our country honorably during the Korean War in the US Army. He married Myrna Miner on July 6, 1973 in Dearborn. Together they raised their family in Lincoln Park. John was a proud union member and retired from Ford Motor at Wayne Assembly.John was active in the Boy Scouts from the time his sons attended until well after retirement working with many boys to attain their Eagle Scout which he thought was so important. John received the Silver Beaver Award. A member of the Monroe Ward of the Church of Jesus Christ of Latter-day Saints, John was active and fulfilled many positions for the church that he loved. John was an avid genealogist and enjoyed researching family history. Myrna and John also enjoyed traveling.John is survived by his loving wife, Myrna; his children, Joyce Patricia Malone, John (Nicole) Utykanski of Cedar Hills, UT, Philip (Pamela) Utykanski of Sarasota, UT, Ellen (Marty) Premtaj of Allen Park, James A. (Deborah) Lusk of Trenton, Michael (Kathy) Lusk of Dexter, Shannon (Michael) Utnage of Wyandotte, Corey A. Lusk of Saginaw; 18 grandchildren; 27 great-grandchildren.Preceding John in death was his daughter, Theresa Pisarski; and his sisters, Joan Flucker and Yvonne Davis.Visitation will be held on Sunday, Feb. 21st from 4:00 pm – 8:00 pm at Wolfe-O’Neill Funeral Home in Kalkaska. The funeral service will be on Wednesday at 1:00 pm at the Church of Jesus Christ of Latter-day Saints, 18701 Grange Road, Riverview, MI 48193 with visitation beginning at 10:00 am. Burial will be at Our Lady of Hope Catholic Cemetery.Memorials may be given in John's name, LDS Missionary Fund, 3874 Meadowview St., Lambertville, MI 48144.Condolences can be left online for the family at wolfeoneill.comArrangements were made by Wolfe-O’Neill Funeral Home, our family serving yours.

John Frederick Utykanski, Sr., 78, of Petersburg passed away on February 19, 2016 at Henry Ford Wyandotte Hospital in Wyandotte. He was born on January 3, 1938 in Saginaw, the son of the late John and Elizabeth (Mayette) Utykanski.John was a... View Obituary & Service Information

The family of John Frederick Utykanski created this Life Tributes page to make it easy to share your memories.

Send flowers to the Utykanski family.