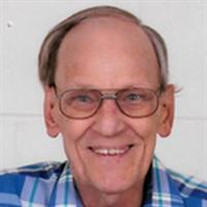 John L. Thompson, 79 of Lake Ann, passed away on June 15, 2016 at Munson Medical Center in Traverse City. Born on March 27, 1937 in Detroit, he is the son of the late Lesley and Amy (Moll) Thompson.John is survived by his wife, Mary; children,... View Obituary & Service Information

The family of John Leslie Thompson created this Life Tributes page to make it easy to share your memories.

Send flowers to the Thompson family.