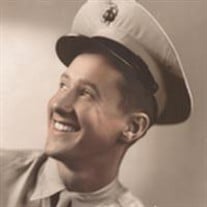 John J. Sulok, Jr., 89, of Rapid City, passed away at his home on Saturday, April 25, 2015. He was born on October 19, 1925 in New Haven, Connecticut, the son of the late, John and Anna (Nemeth) Sulok, Sr.John was a veteran of the US Marines with the 3rd AAA serving during WWII. During his four years with the Marine Corps., John served in the Pacific and the Orient. During this time, he participated in the surrender of Japanese forces in Japan and China.John retired from Oak Electronics in Illinois where he was the supervisor of quality control inspection in Plant 4. He was a volunteer fireman for 18 years with the McHenry Township Fire Prevention District where he served as a captain.John was also a member of the American Legion and a 3rd Degree Member of the Knights of Columbus. He served as an Assistant Scout Master with the Boy Scouts, as a Village Trustee for Johnsburg, IL, an assistant ski patrol leader, and was a member of the Wildlife Federation.John was a resident of Rapid City since 1984. He married Helen Earley on June 7, 1997 in Traverse City. His hobbies included golfing, reading, music, building electronic units and star-gazing through his home-made telescope. In his younger days, John was a real outdoorsman and enjoyed boating, skiing, camping, and fishing. He also was an animal lover.John was proceeded in death by his first wife, Miriam; his second wife, Helen who passed March 12, 2015; and all of his siblings, Georgie, Meg and Annie.Graveside services will be held on Thursday, April 30th at 11:00 am with Kalkaska VFW Post 8684 performing military honors at Clearwater Township Cemetery.Memorials may be given to Hospice of Michigan, 10850 E. Traverse Hwy., Traverse City, MI 49684.Condolences may be left online at wolfeoneill.com.Arrangements were made by Wolfe-O’Neill Funeral Home, our family serving yours.

The family of John J. Sulok, Jr. created this Life Tributes page to make it easy to share your memories.

Send flowers to the Sulok, family.