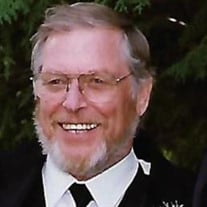 John Edward Ferguson, age 78 of Alden, passed away peacefully on Friday, November 27, 2020, at Meadow Brook Care Facility. John was born April 23, 1942, in Grand Rapids, MI, to the late Russell and Mary Ellen (Holden) Ferguson. He graduated from Traverse City Central High School, attended Northwestern Michigan College, and went on to work in sales, environmental and recycling work in the tire industry, and served as Helena Township Supervisor. John loved working with his hands, from renovating old houses to woodworking projects with his wife Sandra. A true Michigander, he appreciated nature, hunting rocks on the shores of the Great Lakes, fishing, and touring the Coy Mountain Preserve near his home. A stranger to no one and known for his sense of humor, John instilled a sense of adventure and wonder in those who encountered him, most especially his children and grandchildren. John is survived by his wife of 38 years, Sandra (Way) of Alden; children from his first marriage Joan, Amy (Scott Matteson), Jamie (Angie), John (Gaby) and their mother Frances Fehrenbach. Also surviving John are step-children Craig (Cathy) Denton, Chris Denton, and Melissa (Michael) Denton Fitzpatrick, and many wonderful grandchildren: Eden, Claire, Aage, Stella, and Julia Denton Grenchik; Michael (Olivia) Denton and Rachel Denton; Diana, Jacob, and Molly Ferguson; great grandchildren Meadow Whittaker and Luke Allgeier; and sisters Gloria (Niblack) and Becky (Don) Haney. He was preceded in death by his stepmothers Bertha Lucky and Virginia Buckley and brothers Richard and Charles. A memorial service is being planned for a later date. John’s family extends deep gratitude to the compassionate staff at Meadow Brook Medical Care Facility. In lieu of flowers, contributions may be made to the Disability Network of Northern Michigan; Meadow Brook Foundation of Bellaire, MI; or a cause of your choice. Cremation arrangements provided by Wolfe-O'Neill Funeral Home, our family serving yours.

The family of John E. Ferguson created this Life Tributes page to make it easy to share your memories.

Send flowers to the Ferguson family.