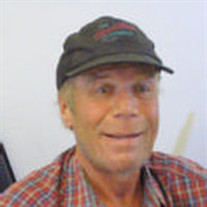 James R. Walter, lovingly referred to as “Jimbo”, of Lincoln Park, died January 26, 2011, at Munson Hospice House. He was born September 24, 1957, to the late Lewis and JoAnn (Gibbons) Walter. James lived his entire life in downriver Detroit. He loved people and his family and was an avid sports fan, and especially loved the Detroit Tigers, Red Wings, and Lions.James is survived by his siblings Barbara (Lloyd) Agte of Plummer, Idaho, Kathleen (John) Downey of Lafayette, Indiana, Christine (James) Corgel of Westport, Connecticut, Carol (Karl) Helfrich of Park Ridge, Illinois, and Timothy Walter, Paul (Jennifer) Walter, Matthew (Beth) Walter and Peter (Wendy) Walter all of Traverse City. He is also survived by numerous nieces, nephews and cousins.Besides his parents, James was preceded in death by his sister and brother-in-law Sally (Frank) Arleth of Roscommon.James had a personal connection to the Blessed Hope Christian Church and Mission and his family requests that memorial contributions for James be directed to: Blessed Hope Christian Church and Mission, 1706 Fort St., Lincoln Park, MI 48146.A memorial service for James is being planned for later in the year.Condolences may be left on-line at www.wolfeoneill.comArrangements were made by Wolfe-O'Neill Funeral Home, our family serving yours.

The family of James Walter created this Life Tributes page to make it easy to share your memories.

James R. Walter, lovingly referred to as “Jimbo”, of Lincoln...

Send flowers to the Walter family.