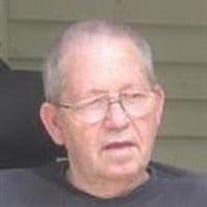 James “Jim” L. Williams, 69, of South Boardman, passed away on Sunday, January 13, 2013 at Munson Medical Center in Traverse City, surrounded by his loving family. He was born on October 24, 1943 in Double Springs, Alabama the son of the late Willie and Novia (Battles) Williams.Jim was a veteran serving our country in the US Army where he was a tank mechanic. He would later on become a certified master mechanic. Jim married Janice Martin on December 24, 1963 in Elk Hart, Indiana and she preceded him in death in 2007. He was an over the road truck driver during most of his life. Jim married Jacqueline Hohler on July 25, 2009 in South Boardman. His hobbies included breeding, raising and training Morgan horses, riding his “Goldwing” motorcycle, dogs and having fun with his family and friends. Jim is survived by his wife, Jackie; his children, Mary (Rob) Williams of South Boardman, Laura (Tim) Buist of Jacksonville, Florida, Gina (Michael) Bax of Portage, Mike (Sarah) Wessel of Bartow, Florida and Peter (Wendy) Wessel of Alpena; his grandchildren, DJ, Lacy, Tara, Brooke, Brandy, Amber, Meagan, Ryan, Taylor, Nick, Natalie, Lena, Emma, Allie; great-grandchildren, Andrew, Saige, Phoenix, Peyton, Paris, Joshua and Justin; and his siblings, Dorothy (Art) Peter in Indiana, Christine Flynn of Alabama, Raymond Williams of Indiana and Marlin Williams of Michigan. Preceding Jim in death is his children, Jenece Williams, James D. Williams, and Scot Williams; his siblings, Carlos Williams, Harce Williams, Gelene Pearl and AJ Williams.A memorial service honoring his life will be held on Saturday, January 19th at 2:00 PM at Wolfe-O’Neill Funeral Home with visitation starting at 1:30 PM.Condolences can be left online for the family at www.wolfeoneill.com.Arrangements were made by Wolfe-O’Neill Funeral Home, our family serving yours.

The family of James "Jim" L. Williams created this Life Tributes page to make it easy to share your memories.