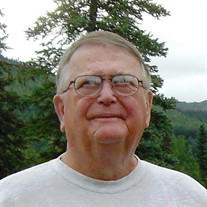 Jim Besaw, 86, of Traverse City, a resident of Long Lake Township, passed away Oct. 31 from the presence of loving family members into the presence of his Savior. He was born Jan. 25, 1931 to Mabel (McClean) and Clarence "C.R." Besaw in Detroit.... View Obituary & Service Information

The family of James Frederick Besaw created this Life Tributes page to make it easy to share your memories.

Send flowers to the Besaw family.