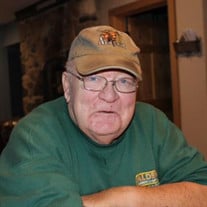 Hugh “Pips” Wilke, 78, of Rapid City, passed away on October 22, 2021, at his home. He was born on July 9, 1943, in Goodrich, the son of the late Harold and Beatrice (Willson) Wilke. Pips was a veteran serving honorably in the US Navy. Pips was a lifelong resident of the Rapid City area. As a young man, he worked with his dad at the Torch Lake Marina for many years. When returning from the Navy he began his career as a truck driver. He married Nikki Crambell on April 12, 1980, in Kalkaska. Pips enjoyed golf, boating, fishing, and hunting. Always ready with a joke to share, Pips had a great sense of humor. In his later years he and Nikki would winter in Texas. Pips is survived by his beloved wife, Nikki; son, Kenneth R. Wilke, of Rapid City; 5 grandchildren; and 1 great-grandson. Cremation has taken place and a memorial service will be held on Thursday, October 28th at 3:00 pm at Wolfe-O’Neill Funeral Home in Kalkaska. Visitation will be one hour prior to the service. Memorials may be given to the American Diabetes Association, PO Box 7023, Merrifield, VA 22116-7023; or the American Heart Association, PO Box 840692, Dallas, TX 75284-0692 Arrangements were made by Wolfe-O’Neill Funeral Home, our family serving yours.

The family of Hugh "Pips" Wilke created this Life Tributes page to make it easy to share your memories.

Send flowers to the Wilke family.