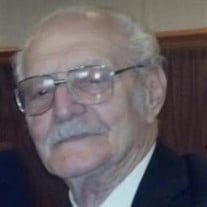 Most beloved, Howard L. Heading, Sr. age 94 of Fife Lake, went to join his Heavenly Father on Monday, August 10, 2020. Howard was born to the late, Harry and Lillian (Willard) Heading on April 2, 1926 in Bay City, Michigan. Howard married Mary Ann Cauchy on December 1, 1945, in Bay City Michigan. They have been married for almost 75 years. Howard retired as a Fleet manager at age of 62. He spent his life giving himself to others. Howard was accepted into the order of St. Francis in 1972 and was a member of the St. Vincent DePaul Society of Bay City. Howard was a Eucharistic minister and choir member at St. Aloysius Catholic Church. He taught religious education and marriage counseling with his wife, Mary Ann for many years. Howard drove many miles every week to deliver food to the poor and Eucharist to the shut ins. He would gather donations and food for the Fife Lake Food Pantry. He was an inspiration to family and friends, taught others to be better people by his example. Howard truly touched so many hearts. He made each one of his children feel like they were his favorite. Howard was a true follower of Christ and he practiced what he taught. He was a shinning star to his family and community. Howard is survived by his loving wife, Mary Ann Heading; children, Howard (Kathy) Heading, Paulette Ing, Susan TudeThuot, Kathy Morgan, Roxann Miesen, William (Becky) Heading, Mary (Rob) Schmittling, Mary (Jeff) Lape, James (Patty) Heading, Michael (Kim) Heading; several foster children; many grandchildren, great grandchildren and great-great grandchildren. He was preceded in death by three sons, Gary Heading, Paul Heading, and Mark Heading; siblings, Beaulah, Gerry, Betty, Art, Virgil and Johnny. The family of Howard invites you to visit and share memories on Friday, August 14, 2020, at Wolfe-O’Neill Funeral Home, 106 S. Cherry Street, Kalkaska, MI. from 4:00 p.m. until 8:00 p.m. with a scripture service at 7:00 p.m. at the funeral home. We do ask that you wear a mask please. A funeral mass will be held on Saturday, August 15, 2020, at 11:00 a.m. at St. Aloysius Catholic Church, with a visitation beginning at 10:00 a.m. on Saturday at church. Father Norman Dickson will be officiating. A burial will take place in St. Patrick Cemetery Bay City, Michigan at 1:00 p.m. on Monday, August 17, 2020. In lieu of flowers memorial donations can be made to St. Aloysius Catholic Church. Arrangements provided by Wolfe-O’Neill Funeral Home. Our Family Serving Yours.

The family of Mr. Howard L. Heading Sr. created this Life Tributes page to make it easy to share your memories.

Send flowers to the Heading family.