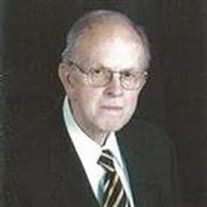 Harry Edward Voice, 81, of Fife Lake, passed away on Monday, April 22, 2013 with his loving family by his side. Harry was born in Battle Creek, the son of the late Maurice and Lillian Voice.Harry was a lifetime resident of Fife Lake, and he graduated from Fife Lake High School in 1950. He proceeded to graduate from General Motors Institute in 1952 and then was drafted in the U.S. Army during the Korean War. Following his military service he returned to Fife Lake and worked with his father who owned Voice Chevrolet Sales. Harry married Anna Marie Larsen on April 27, 1957 in Traverse City.Harry became owner of Voice Chevrolet Sales in 1956. The dealership remained in Fife Lake until September 1967, and then he moved into the newly constructed facility at Kalkaska. At that time Buick and Pontiac lines were added, and the dealership became known as Voice Motor Sales, Inc. Harry was recognized and received many awards for quality customer service prior to his retirement in 2012.Harry was a member of the Fife Lake United Methodist Church, and served as Chairman on the Administrative Board at various times. In the past, he served on the Fife Lake Village Council over 30 years as President or Trustee, the Grand Traverse County Board of Education, later known as TBA-ISD for 52 years, the Forest Area Community School Board, the Scenic Trails Council Board, and received the Silver Beaver Award from the Boy Scouts of America. He was a lifetime member of the Kalkaska Rotary Club, and was Rotarian of the Year in 2001. For many years, Harry volunteered on the Fife Lake Fire Department and was a charter member of the Fife Lake Rescue Unit. He received a Distinguished Service Award for the valuable contributions he made to the Fife Lake Village, from the Grand Traverse Planning Commission.Harry is survived by his beloved wife and partner, Marie; his sons, who he took great pride in, Edward (Gayle Joseph) Voice of Alden, and Steven K. (Kathryn Huffman) Voice of Fife Lake; his grandchildren, Beth (Matt) Olosky of Williamsburg, Joann (Bryon) Miracle of Kalkaska, Ryan (Amber) Voice of Williamsburg, Mitchell (Jaclyn Pietrykowski, fiancée) Voice of Fife Lake; great-grandchildren, Elijah, Topher, Joshua, Jayna, Riley, Rebecca, and Landon.Visitation will be held on Thursday, April 25th from 2:00 p.m. until 4:00 p.m. and 6:00 p.m. until 8:00 p.m. at Wolfe-O’Neill Funeral Home in Kalkaska. The funeral service will be held on Friday at 11:00 a.m. at the Fife Lake United Methodist Church, with burial at Fife Lake Cemetery. Military honors will be provided by the Fife Lake American Legion Post 219.Memorials may be made to the Fife Lake United Methodist Church, 206 N. Boyd St., Fife Lake, MI 49633, or the Fife Lake Ambulance, P.O. Box 216 Fife Lake, MI 49633.Condolences may be left online at www.wolfeoneill.com.Arrangements were made by Wolfe-O’Neill Funeral Home, our family serving yours.

Harry Edward Voice, 81, of Fife Lake, passed away on Monday, April 22, 2013 with his loving family by his side. Harry was born in Battle Creek, the son of the late Maurice and Lillian Voice.Harry was a lifetime resident of Fife Lake, and he... View Obituary & Service Information

The family of Harry Edward Voice created this Life Tributes page to make it easy to share your memories.

Send flowers to the Voice family.