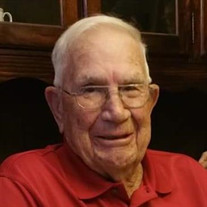 Harold F. Smith, 95, of Fife Lake, MI and Zephyr Hills, FL, passed away January 19, 2019, at the Heritage Park Health and Rehabilitation Center in Dade City, FL. A long-time resident of Fife Lake, he was happy to spend his winters golfing in Florida. Harold proudly served his country in the Army during WWII. He served in the Pacific Theater in places like New Guinea, Philippines, and Guam. After he returned from the war, Harold married Miriam McLaughlin in Grand Rapids, May 29, 1948. Later they moved north to Smithville on M-66 where they lived until 1963. The family then moved into the house that Harold built in Fife Lake and lived there until Miriam passed away in 2003. In northern Michigan, Harold pursued his love of the outdoors, becoming an avid fly fisherman, hunter and golfer. He was a proud member of American Legion Post 219 in Fife Lake and he participated in as many activities as possible. Harold is survived by his children, Michael (fiancé Linda) of Ellenwood, GA, John (Julie) of Fife Lake, Bill (Lorri) of Traverse City, Janet (Ken) Hall of Interlochen, 11 Grandchildren, 12 Great Grandchildren and his sister Nancy Hall of Melbourne, FL. He is also survived by his companion of 14 years, Kathy Perrin. Harold was preceded in death by his wife, Miriam, his daughter Carol, daughter in-law Debbie, and his siblings Dorothy Smith, Mary Hammond, Wayne Smith, Marvin Smith and Winnie Cavanaugh. The mass is scheduled for Saturday, May 4th at 11:00 AM at St. Aloysius Catholic Church in Fife Lake. Reverend Norm Dickson will be officiating. Burial will be at Garfield Twp. Cemetery. In lieu of flowers, memorials may be given in Harold’s honor to the American Legion Post 219, 10283 M-186, Fife Lake, MI 49633 or the American Cancer Society. The family is being served by the Wolfe-O’Neill Funeral Home, our family serving yours.

Harold F. Smith, 95, of Fife Lake, MI and Zephyr Hills, FL, passed away January 19, 2019, at the Heritage Park Health and Rehabilitation Center in Dade City, FL. A long-time resident of Fife Lake, he was happy to spend his winters golfing in... View Obituary & Service Information

The family of Harold F. Smith created this Life Tributes page to make it easy to share your memories.

Send flowers to the Smith family.