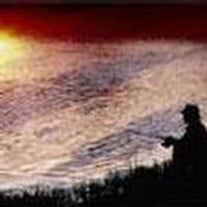 George F. Stacy, age 89, of Fife Lake, passed away on Tuesday, July 5, 2011, at Grayling Nursing and Rehabilitation Community. He was born on April 13, 1922 in Brown City, Michigan to the late Ellis and Mabel (Jeffers) Stacy. George married Elizabeth J. "Betty" Clapsaddle on November 21, 1941 in Brown City. George and Betty moved to Fife Lake in 1977.George was a self-employed carpenter for most of his life. He owned and operated Stacy Buliders with his late son Russell in the Brown City Area. He served in the U.S. Army during WWII, receiving a purple heart for his bravery. George enjoyed fishing, hunting, woodworking and watching the Detroit Tigers.He is survived by his loving wife of 69 years, Betty; children, Carolyn Thomas of Carsonville, David T. (Leila) Stacy of Buckley, Stephen L. (Lorie) Stacy of Fife Lake, and Susan A. (Dale Mooring) Stacy of Fife Lake; 14 grandchildren; 12 great grandchildren; brother, William Stacy of Lapeer; and many nieces and nephews. George was preceded in death by his parents; son, Russell Ellis Stacy in 1970; son-in-law, William Thomas; sisters, Nellie Setter, Margaret Schriber, Lila Mitchell; brothers, Robert and Stanley; brother-in-law, Donald Huffman; and mother-in-law, Mary Clapsaddle. A memorial service for George will be held at a later date. Memorials may be given in George's honor to the donor's choice. Condolences may be left online at www.wolfeoneill.com.Arrangements were made by Wolfe-O'Neill Funeral Home, our family serving yours.

The family of George Francis Stacy created this Life Tributes page to make it easy to share your memories.

Send flowers to the Stacy family.