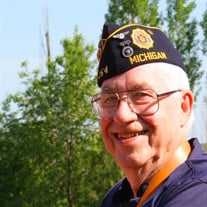 George Ouvry from Mancelona, died on Tuesday, December 19, 2017 at his daughter’s home. He was a member of St. Anthony of Padua Catholic Church in Mancelona. George was born in Detroit to Belgian immigrants Charles and Madeleine Ouvry. High moral character and a strong work ethic were instilled in him at an early age. At seventeen years old, at the beginning of WWII, George dropped out of high school, lied about his age and volunteered to be drafted into the United States Navy to serve his country. He spent two years on a destroyer and mine sweeper traveling across the Mediterranean, the Pacific, through the Panama Canal, the China Sea, and along the coast of France, Italy and Africa. When his tour was complete, he returned to his home in Mancelona where he met and married his sweetheart, Charlotte Smith. Together, they owned and operated an egg farm, the Smith and Ouvry Shell gas station and garage in Mancelona, a Dairy Queen, the Mancelona Laundromat, and Skogmos RC&GO in Mancelona. This year they celebrated 69 years of marriage. George’s life was spent in the service of others. He was one of the youngest mayors to serve in Mancelona—a vote that was staged in a coup. He also served on the Antrim County Board of Commissioners, the Mancelona Board of Trustees, Antrim Country Economic Development Council, the Veterans Affairs Committee and is a long-standing member of the American Legion. In 2006, he took on the tremendous endeavor making sure that the graves of Antrim County war veterans were properly marked. He spent countless hours researching archives, working through military records, walking cemeteries and laying headstones. In 2007, the Sons of the Union Veterans of the Civil War Camp 14 presented George with an Honorary Membership in Camp 14 for the tremendous research he had been doing on not only Civil War veterans, but the veterans of all wars in the Antrim County area. In addition to his work serving veterans, George was an avid stamp collector and he enjoyed watching the birds at his bird feeder with his life-long friend and wife Charlotte. Every Christmas, their friends and neighbors looked forward to receiving a package of homemade Lukken cookies. George is survived by his wife Charlotte; their three children, Gary of Mt. Pleasant, Norman of Lansing, and Janice (Roger) McDaniel of Mancelona; grandchildren, Autumn Ouvry of Manton, Jennifer (Tom) Burke of Grand Blanc, Rebecca of Mt. Pleasant, Shane and Samantha Young of Mancelona; great-grandchildren Joseph, Madeleine and Brayden Burke of Grand Blanc; and brother Raymond (Linda) of Yuma Arizona. In addition to his parents, he was preceded in death by his son, Brian, and his brother and sister-in-law Roger and Maxine. There will be a celebration of life luncheon at the American Legion in Mancelona on December 30th from 1:00-3:00 PM. A graveside service with full military honors will be held in the spring of 2018. In lieu of flowers, donations can be made to the George Puckett Post #264 American Legion, 9850 S. Front St., Mancelona, MI 49659. The family is being served by Wolfe-O’Neill Funeral Home, our family serving yours.

George Ouvry from Mancelona, died on Tuesday, December 19, 2017 at his daughter&#8217;s home. He was a member of St. Anthony of Padua Catholic Church in Mancelona. George was born in Detroit to Belgian immigrants Charles and Madeleine Ouvry.... View Obituary & Service Information

The family of George Ouvry created this Life Tributes page to make it easy to share your memories.

Send flowers to the Ouvry family.