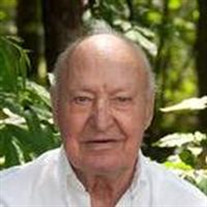 Francis C. “Frank” Trombley, 91, passed away at his home in Kalkaska on Friday, September 13, 2013 surrounded by his loving family. He was born on December 27, 1921 in Detroit to the late Fredrick and Rose Mary (West) Trombley.Frank served his country proudly in the United States Army Air Force during WWII. Upon returning from the war, he married the love of his life, Addie Hynes. They made their home in Clinton Township before moving to Kalkaska in 1987. They were married for 62 wonderful years when Addie passed away in October of 2009. Frank was a life-long member of the United Brotherhood of Carpenters for 67 years. He was a member of St. Mary of the Woods Catholic Church. He will be deeply missed by all those that knew and loved him.Frank is survived by his devoted children, Carrol Cantor of Ossineke, Alan Trombley of Kalkaska and San Antonio, TX, Rose Trombley of Kalkaska, Margaret (Gary) Smith of Sandpoint, ID, David Trombley of Ann Arbor, and Diane (Cass) Budzynowski of Traverse City; his dear sister-in-law, Betty Trombley; 11 cherished grandchildren; and 11 precious great-grandchildren.He was preceded in death by his wife, Addie; 3 of his sons, Frank, Phillip, and Dale; 3 brothers; and 1 sister.Visitation will be on Friday, September 20th from 5:00 pm until 8:00 pm at Wolfe-O’Neill Funeral Home with a scripture service at 7:00 pm. The funeral mass is Saturday at 11:00 am at St. Mary of the Woods Catholic Church with Reverend Norman Dickson officiating. Burial will be at Evergreen Cemetery. Memorials may be given in Frank’s honor to the Kalkaska Commission on Aging, PO Box 28, Kalkaska, MI 49646.Condolences may be left online for the family at www.wolfeoneill.com.Arrangements were made by Wolfe-O’Neill Funeral Home, our family serving yours.

The family of Francis "Frank" C. Trombley created this Life Tributes page to make it easy to share your memories.

Francis C. “Frank” Trombley, 91, passed away at his home in Kalkaska...