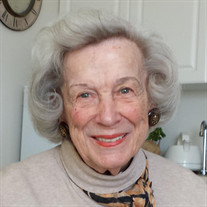 Frances Margaret Keyes, 94, passed away on September 28, 2018 at the Grand Traverse Pavilions. The daughter of Kate Clarke and James Irl Keyes, she was born on a farm in Richmond, Missouri on the night of December 10, 1923, requiring Dr. Green to travel 5 miles in a horse and buggy in a snowstorm to deliver her. She grew up in the rural community of Hickory Grove where she attended a one room school house through the 8th grade. She was a clever, energetic girl who helped with chores on the farm, grew popcorn to sell to the local theater, rode the family horse bareback, and delighted in playing tricks on her older brother, Charles. She graduated from Richmond High School where she was both a cheerleader and performed the lead role in the school play. She graduated from Central Business College in Sedalia, Missouri, and later took additional courses at both Bradley University and the University of Michigan. She completed a 2 year program in Medical Record Science, and was certified as an Accredited Record Technician. After graduating from college, Fran moved to San Antonio, TX where she was hired from a large number of applicants by convincing a prospective employer that she could operate a machine of which she had no knowledge. She also worked for Shell Pipeline in Houston, TX. In 1943, at 19, she met and married William H. Boyd, an Army Air Force navigator cadet. As did many GI wives at the time, Fran followed her husband across the country to the various military bases where he was stationed. Fran usually found work in Civil Service positions on the base in either medical facilities or civilian personnel. She also worked in banks, stores, and once in an airplane hangar. Always curious and adventurous, she once donned borrowed fatigues and was smuggled on board a new bomber by complicit cadets so that she could see the latest in wartime technology. She took her very first airplane ride, with a parachute on her back, in a B-24 military plane traveling from Pyote to Dallas, TX to attend a seminar on military correspondence. During the war, Bill and she enjoyed many of the activities provided servicemen, explored the areas where they were stationed, and made many friends. Their adventures included trips to Mexico, visiting Carlsbad Caverns, riding horse back on sand dunes, camping in the desert, swimming in the Gulf of Mexico, and dancing at the Waldorf Starlight Room in New York to Tommy Dorsey and his orchestra. After the war they settled in Illinois and began their family. They lived in Rock Island and then Viola, while Bill completed college and attended McCormick Presbyterian Seminary in Chicago, and became a Presbyterian minister. In 1954 they moved to Detroit with three young daughters where Bill served the Cadillac Presbyterian Church. After their divorce in 1957, Fran became a single working mother during a time when it was an uncommon occurrence. She moved her family to Grosse Pointe, MI to give her daughters the benefits of a good education. She was employed as the Director of Medical Records at Doctors Hospital for 33 years, and typed surgical dictation and x-ray reports for several other hospitals after hours to support her family and send the girls to college. While working, she exposed her growing daughters to the contemporary political issues of civil rights and the changing role of females in society. After her retirement Fran served as a Docent at the Detroit Historical Museum, ushered at both the Fischer Theater and the Masonic Temple, and did volunteer work at the Grosse Pointe War Memorial. She was a member of Jefferson Avenue Presbyterian Church for over 60 years, and a member of the English Speaking Union, and the D.A.R. She spent many years researching family genealogy, tracing her lineage back to the founders of this country, and did extensive research on the Keyes, Clarke, Edgar, Fitch & Lee families. She loved to travel and was proud of having been to 48 states, many European countries, Canada, Mexico, Egypt, Greece, Turkey and China. She enjoyed taking backroads and exploring the small towns, cemeteries, battlefields, caves and hilltops she found along the way. When abroad, she toured castles and cathedrals, crawled through pyramids, rode camels, sailed down the Nile and Danube rivers, and walked on the Great Wall of China. One of her favorite memories was flying to London on the Concorde and sailing home on the Queen Elizabeth II. Fran was a curious, resourceful, intelligent, and occasionally stubborn woman who attempted to tackle household challenges by consulting library books and getting supplies at her local hardware store. She had a special talent for making something out of nothing, and creating something special by using ordinary objects in unusual ways. She was known for making everyone feel like an honored guest in her home. Fran cared for aging friends and always made room at her table for those who had no family during holiday celebrations. She was loved by many who enjoyed her sharp wit and clever comments, and she will be greatly missed for her kind, loving and gentle nature. Fran was preceded in death by her parents; her brother; her daughter, Crystal (Boyd) Wendland; and her grandson, Douglas B. Whan, Jr. She is survived by her daughters, Sheryl (Boyd) Langdon and Susan Boyd; her granddaughter, Sarah Mellen; and her great-granddaughter, Sarah Grace Reilly. Interment will be at Hickory Grove Cemetery, Richmond, Missouri. Arrangements were made by Wolfe-O'Neill Funeral Home, our family serving yours.

Frances Margaret Keyes, 94, passed away on September 28, 2018 at the Grand Traverse Pavilions. The daughter of Kate Clarke and James Irl Keyes, she was born on a farm in Richmond, Missouri on the night of December 10, 1923, requiring Dr. Green... View Obituary & Service Information

The family of Frances Margaret Keyes created this Life Tributes page to make it easy to share your memories.

Send flowers to the Keyes family.