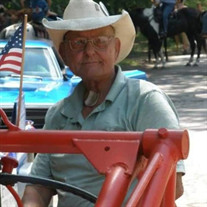 Eugene “Gene” Malloy, of Fife Lake, passed away peacefully at home with his wife by his side on Thursday, November 4, 2021. He was born on August 11, 1935, in Traverse City, Michigan to the late, Herbert and Minnie (Knowles) Malloy. Gene was in the United States Air Force and honorably discharged. Gene married Marilyn Greenman on August 15, 1959, in Kingsley, Michigan. They have been married for 62 years. He was a cook on the Great Lakes Ships for many years, with that experience that made him an amazing cook. Gene retired from Grand Rapids Die Cast after 17 years, He and Jo then opened their own canvas shop called M & M Trim for 8 years. Gene had a heart of gold; he never met a stranger, to him everyone was a friend. He loved working in his yard and his man cave. Gene was a very proud member of the Great Lakes Antique Tractor Club. He is survived by his loving wife, Marilyn “Jo” Malloy; stepson, Terry Greenman, and his daughter, Velma (Tim) Pfaff; six grandchildren, and several great-grandchildren; and his sister, Sally Merrick. Gene was preceded in passing by two brothers, Robert Malloy, and David Rancour: a sister, Louise Smith, and a brother-in-law, Clifford Merrick. A funeral service will take place on Wednesday, November 10, 2021, at 12:00 p.m. at Wolfe-O’Neill Funeral Home. Pastor Kim Hough will officiate. Visitation will be on Wednesday at 11:00 a.m. at the funeral home until the time of service. Interment will follow in Southern Cemetery, Central Lake. Memorials may be made to American Cancer Society, American Heart Association or Cherryland Humane Society. Arrangements provided by Wolfe-O’Neill Funeral Home, our family serving yours.

The family of Eugene Malloy created this Life Tributes page to make it easy to share your memories.

Eugene “Gene” Malloy, of Fife Lake, passed away peacefully at...

Send flowers to the Malloy family.